Baseball / Storm Join Florida League With A Bang! Down Suns 10-5 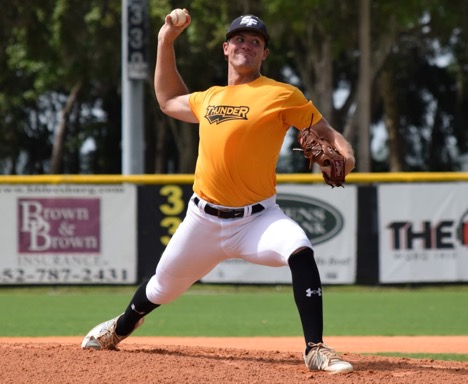 Leesburg, FL – The Leesburg Storm started off their tenure in the Florida Collegiate Summer League on the right foot, erupting for a double-digit run total in the franchise’s first-ever contest. Carson Pillsbury (Santa Fe State) powered his team on the mound to secure a 10-5 victory over the DeLand Suns at Pat Thomas Stadium.

“Feels good, it was good to play again and just get out there with the boys,” remarked Pillsbury, who picked up his first win against collegiate competition. The recent Seven Rivers Christian High School graduate earned the victory on the strength of two scoreless innings where he allowed just one base runner (a hit), and struck out four.

“Just a fantastic start for him,” commented Storm manager Rich Billings, “so hopefully he builds on that and I don’t know, can you get much better than that?”

The Storm capitalized on his strong start by putting up runs in the first four innings of the game. Cameron Fredrick (Creighton University) scored the franchise’s first run in the bottom of the first by deking out a throw while he was on third base and sliding right under the tag of Suns’ catcher Diego Garcia (Pasco Hernando CC). Additionally, he now holds the distinction of being the Storm’s first-ever base runner and base stealer, after getting hit by a pitch as the leadoff batter and swiping second base.

Superb work on the base paths was a theme for Leesburg, as they were able to steal seven bases on all seven of their attempts. “They really played hard,” added Billings, “the guys ran the bases hard, they made some things happen…and put some pressure on the defense.”

While DeLand ultimately took the loss, their offense got off to a solid start to the year, especially with the contributions of center fielder Robert Chayka (Kentucky Wesleyan). He was a strong presence at the bottom of the order all game, going 3 for 3 with a home run, two RBI and a pair of runs scored. Chayka’s moonshot to left in the top of the fifth got the Suns within four, as close as they would be to the Storm for the rest of the ball game.

The Storm will be back in action tomorrow night against the Leesburg Lightning, as the in-city teams will write the first chapter of their rivalry at Pat Thomas Stadium at 7pm.

Melching Field at Conrad Park will be the site of the Suns’ home opener tomorrow night where they’ll host the Sanford River Rats at 7pm.