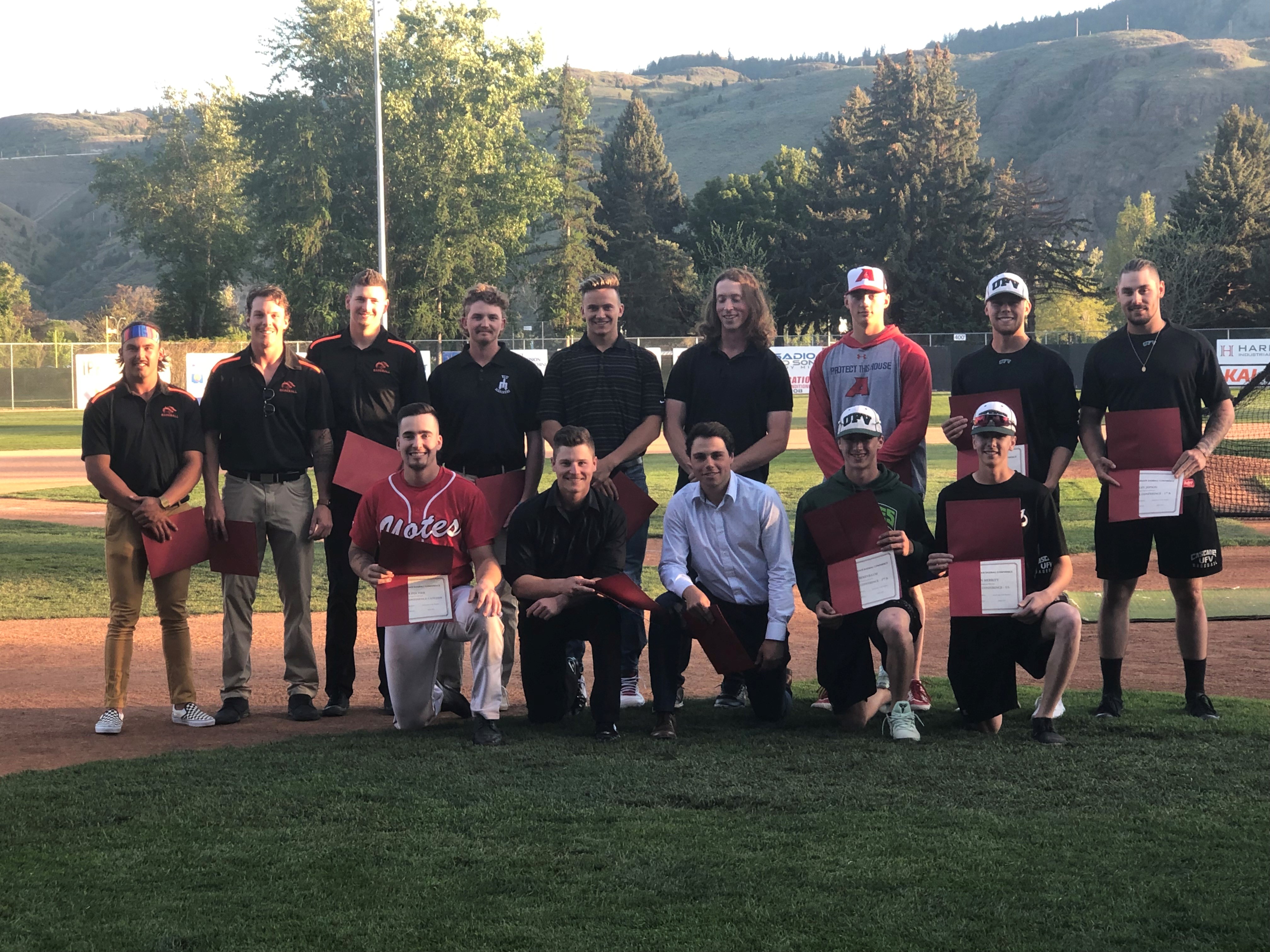 KAMLOOPS, BC—Tyler Moskalyk of the Thompson Rivers University WolfPack  and Riley Jepson of the University of Fraser Valley Cascades were double winners as the Canadian Collegiate Baseball Conference dished out its major awards for 2018-19.   Moskalyk, a graduating right hander from Thunder Bay, Ontario was named the CCBC’s pitcher with the most strike outs and most victories.

Jepson, a native of Kamloops who is planning to complete his university eligibility at a NCAA Division II school in Texas next year had the CCBC’s top batting average and was tied for the league’s most homers.

The awards were handed out at a BBQ at Norbrock Stadium on Wednesday (May 8).  That is the site of the 2019 CCBC championship Tournament.

Moskalyk had a record of 7-1 and had 80 strikeouts.  He had an earned run average of 1.68. Jepson had the league’s top batting average of .405.  He and Vancouver Island University’s Phil Whelen  (Calgary, AB) had the most  homers with six.

Two members of the defending league champion Okanagan College Coyotes were major award recipients as well. Trevor Brigden (Ontario)  was named the top pitcher. He had a record of 6-0, 64 strikeouts, started five of the seven games he appeared in, pitched 36 innings and had an earned run average of 2.00.

Catcher Jake Fischer (Edmonton, AB) had the most RBI’s with 32.

All of the major award winners were also named CCBC all-stars.  All were first team selections aside from Whelan.

Here is the complete list of the CCBC all-stars.   The University of Fraser Valley and Okanagan College had the most players selected with seven followed by the WolfPack with five,  Edmonton Collegiate with three.  Calgary, Prairie Baseball Academy and Vancouver Island University each had two selections.

Utility- Chris Cook (U of C)

Catcher- Matt Korman (U of C)

The Canadian Collegiate Baseball Conference championship tournament opens Thursday (May 9) at Norbrock.  The first game has PBA meeting Edmonton Collegiate at 10 am.  The winner of that game will meet the WolfPack in the feature game at 7 pm.

Play continues Friday (May 10) and Saturday (May 11). For the first time, the CCBC championship final will be a best of three affair.  Game one is Saturday at 7 pm.   Game two and possibly three will be played on Sunday (May 12) at 11 am and 2 pm respectively.

Almost all games will be webcast at www.gowolfpack.ca/baseballtv