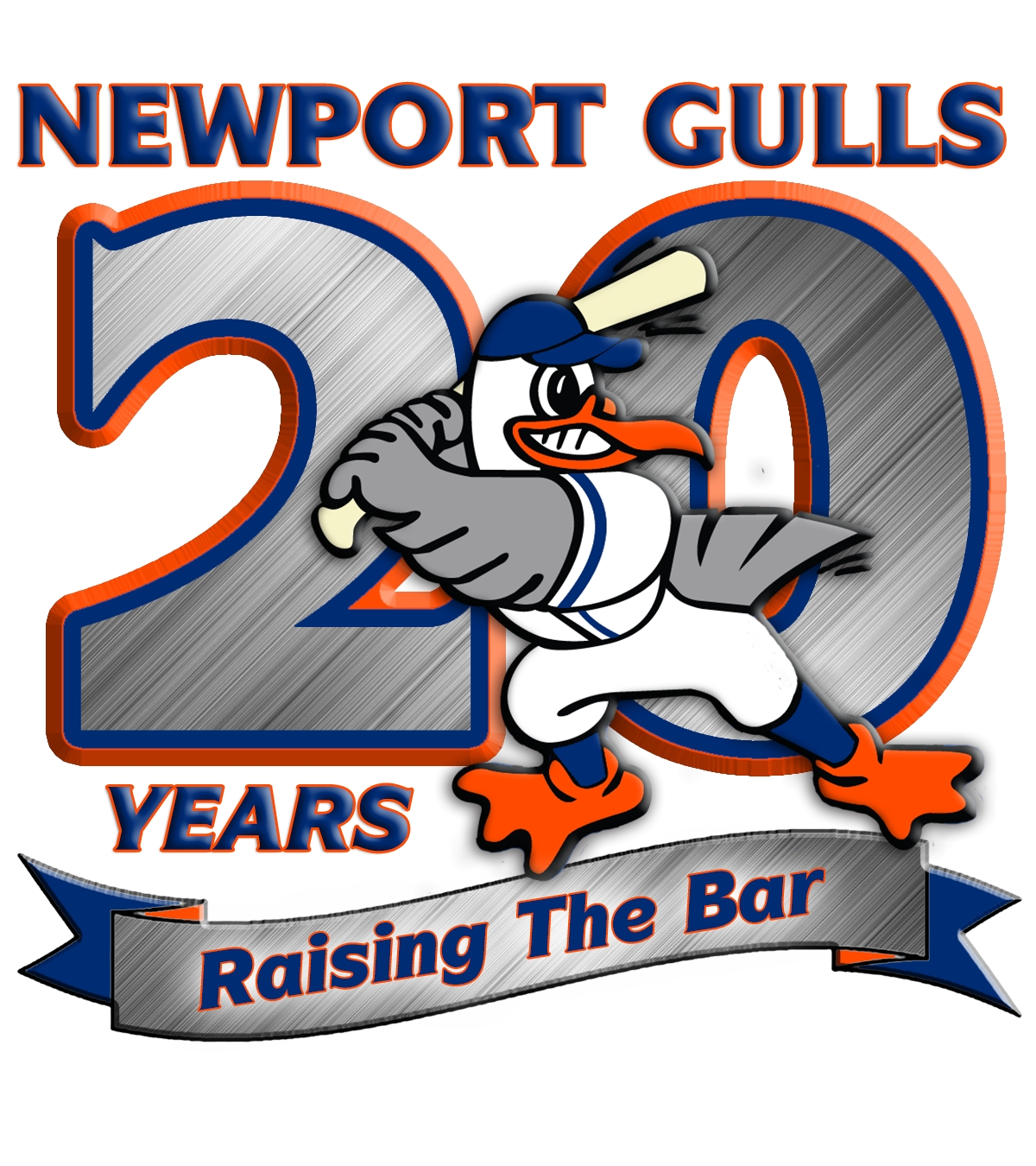 NEWPORT, RI- After the COVID-19 Pandemic canceled the 2020 NECBL season, the Newport Gulls were able to retake the field in 2021. The Gulls set out in hopes of earning their league-leading seventh Fay Vincent Sr. Cup, but unfortunately fell short of their goal on the field however had an extremely successful all-around season.

With the season opener set for Friday, June 4 against the Martha’s Vineyard Sharks, fan attendance was still up in the air. However, on May 21, Rhode Island State Governor Dan McKee declared that there would be no restrictions on outdoor events. On June 2nd, just days before Opening Day, Dan Mckee noted that vaccinated individuals were no longer required to wear masks at such events. This news could not have come at a better time as Gulls Fans came out in record numbers! Cardines Field welcomed 48,698 fans throughout the summer setting a single-season average attendance record with an average of 2,435 fans cheering on the team at 20 home games. This number ranked 5th in the country for all collegiate summer league teams.

With the season finally set to begin on June 4, and fans permitted to attend games, the Gulls still had to worry about Mother Nature. The season opener was canceled due to rain. However, Opening Night’s sponsor, Newport Hospital, was still able to partner with the Gulls that evening, providing vaccines for the local community. Fans would have to wait until June 7 to see their beloved Gulls take the field at home for the first time.

“There’s a lot of emotion in tonight’s game, it’s been over a year and a half since we’ve been out on this field. Just to be out here today is a blessing” said Newport Gulls General Manager Chuck Paiva.

The season began with Teachers Appreciation Night where the Gulls paid tribute to the tireless efforts of our local educators. Free admission was given to teachers and their families and the pregame ceremony included first pitches thrown out by Barbara Cottam (Chair of the Rhode Island Board of Education), Jo Eva Gaines (Member of the Rhode Island Board of Education) and Ashley Adamson (2021 Rhode Island State Teacher of the Year from Hathaway Elementary School in Portsmouth, RI). Almost 1,400 fans were able to attend the game and watch the Gulls earn an 8-4 win over the Valley Blue Sox.

Next, the Gulls were fortunate enough to partner with The Red Sox Foundation and the Keene SwampBats for “Recovery and Rebirth Night” in order to provide a successful food drive for the Martin Luther King Community Center in Newport.

With the help of Newport This Week and A1 Roofing, the Gulls welcomed Little Leagues from across the state to Cardines Field on Friday, June 11. A near sellout crowd of 2,834 fans were in attendance on Little League Night as young players got the opportunity to line the Cardines Field infield  with their teammates during the pre-game ceremony and were given complimentary admission.

A very special night at the ballpark came on June 23 when TD Bank and the Newport Gulls presented Inclusion Night. This was a fun event to support and help raise awareness for individuals with intellectual and developmental disabilities.

After a canceled 2020 season, there is no question the men and women who risked their lives on the frontlines of the pandemic were to thank for the team being out there in 2021. With support from Aspire Dermatology, the Gulls were again able to provide vaccines for the community and show their continued support for the Frontline Heroes.

On June 28 in a game against the Danbury Westerners the longtime Gulls sponsor, Clements’ Marketplace, was generous enough to provide Free Beach Towels as the night’s promotional item. For the next home game, Saccucci Honda offered fans the chance to throw a strike from 120’ to win a new Honda SUV, but unfortunately there was no winner.

Irish immigrants have ties to Newport as early as the 1600’s, while the Gulls Irish Army became prevalent during the team’s first decade in the City by the Sea. Now an annual event, the Newport Irish American Athletic Club helped the Gulls pay homage to Irish culture in the City. Irish American Night at Cardines Field was a huge success welcoming 2,882 fans, a season-high! The Gulls played well for this crowd earning an 8-1 victory over the Mystic Sooners.

Another longtime sponsor, Salve Regina University, is also an important piece of the City so honoring their school was an easy decision. Salve Regina University Night at Cardines saw a huge attendance from students and alumni, and Salve was generous enough to give out Free Gulls T-Shirts to the first 250 fans at the ballpark. Newport Gulls Hall of Famer Mike Melilo (HOF Class of 2016), threw out a ceremonial first pitch as he joined his host mom from when he was a Gull, Professor of Economics at Salve Regina Lorrie Burns.

Raytheon Military Appreciation Night is arguably the most notable night at Cardines each summer. Active and retired military personnel and their families joined the Gulls at Cardines for the organization to pay their respects. Each branch of the military was represented and so was the U.S. Navy's Ceremonial Band, Navy Band Northeast based out of the U.S. Naval War College and Navy Station Newport (NAVSTA Newprot). Navy Band Northeast is one of eleven Navy ceremonial bands worldwide.

The Mark Weed Memorial Scholarship Fund has benefitted hundreds of children from Newport County for over a decade. This past season, the Gulls celebrated Mark Weed Legacy Night to celebrate this extremely positive impact. Mark’s wife, former RI Senate President Teresa Paiva Weed, and many other members of the Rhode Island government came out to support the scholarship fund and with their help, the Gulls were able to raise upwards of $10,000 for summer camp scholarships.

Michael Brennan, a local coach and physical education teacher, has been influencing the youth of Aquidneck Island for decades. This past spring, Brennan required an emergency heart transplant after years of experiencing heart complications and undergoing numerous procedures. Luckily, he received a heart and the surgery transpired at Brigham and Women’s in Boston. Unfortunately, Brennan and his family were now faced with the reality of the expenses owed for Michael’s surgery. Newport County stepped up tremendously to help Michael, so the Gulls decided to be a part of this support and host a night to raise additional funds for his family. WAVE Cycle is an indoor cycling studio in downtown Newport that offered cycle classes to the community in which the proceeds were donated to the Brennan Family. They hosted two classes, which sold out, and on July 16 the Gulls used the night’s 50/50 Raffle and a Silent Auction held throughout the game to raise over $5,000 for the Brennan Family.

Yalanis Wealth Management Group helped the Gulls present American Heroes Night, which gave the organization the chance to honor our Police, Fire and EMT personnel. More than 10 police and fire department honor guards came out to Cardines to present the nation’s colors during the pre-game ceremony as well as 2,429 fans who showed their support!

The Newport Gulls and Cardines Field were fortunate to be chosen as the host of the NECBL All-Star Game on July 18. Hosting players from around the league, fans got to come out and see the top talent throughout the league. Another bright spot from this day was the Home Run Derby!

The Newport Gulls want to thank all of our sponsors, host families, players, coaches and fans for making the return to Cardines Field a great one. These game nights are always fun to present but without the fans and sponsors, it would not be possible. The Gulls look forward to another wonderful season in 2022!

The Newport Gulls, members of the 13-team New England Collegiate Baseball League (NECBL), are a 501(c)(3) non-profit organization, founded as the Rhode Island Gulls in 1998 in Cranston, R.I., before moving to Newport in 2001. In addition to recruiting, fielding, and developing a team of the nation’s top collegiate baseball athletes and attracting 50,000 fans annually to Cardines Field, the predominantly volunteer organization strives to benefit the community of Newport County via summer camps, reading programs, fundraisers, scholarships, and charitable donations – totaling over $1 million since 2001. The Gulls are six-time champions of the NECBL – the winningest franchise in league history – and were ranked as the overall No. 1 summer collegiate baseball team in the country by Perfect Game USA in 2012.

STEEPLECATS OPEN UP AT HOME JUNE 7 AGAINST THE BRISTOL