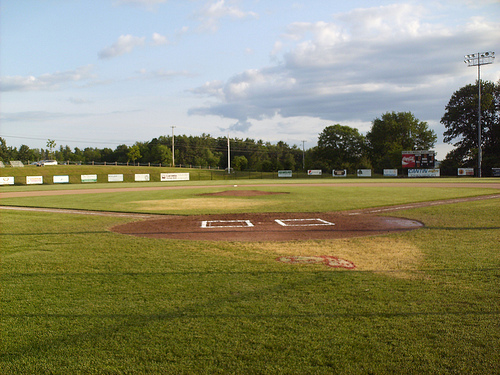 LACONIA, N.H. — Ross Cadena’s solo homer over the Muskrat Monster in the top of the 8th inning was the deciding factor in Upper Valley’s 6-5 victory over the Winnipesaukee Muskrats on Monday night.
Falling behind early, Upper Valley fought back to within one at 5-4 with a three-run fifth inning, before tying the contest with a run in the sixth and taking the lead in the eighth.
Tied 5-5 in the top of the eighth, Ross Cadena (Wichita State University) put the Nighthawks ahead for good with a lead off solo homer. It was his second dinger of the year, after his first also came at Robbie Mills Field back in June.
With Winnipesaukee retiring the first two Upper Valley batters in the fifth, the Nighthawks strung together a two-out rally led by an Austin Wilhite walk. He would come around to score after Greg Hardison (UNC Greensboro) singled and Anthony Quirion (Lamar University) reached on an error. Two at-bats later, Davis Mikell (Castleton University) stepped into the box and ripped a double to drive in both Quirion and Wilhite and make it 5-4.
Aided by a couple of errors, the Nighthawks scored the equalizing run in the sixth. Leading off the inning, Matt Tarabek (Fordham University) reached a miscue before he stole second and advanced to third on another error. Following Ty Adcock’s (Elon University) walk, Riley Smith lifted the ball into left to drive the runner home.
Neither starter factored into the decision following the tied game, but Upper Valley hurler Danny Wirchansky (Pace University) went three innings on the bump allowing three runs and striking out one. Stephen Hansen (Iona College) was critical in relief, tossing 3.2 innings, giving up just one hit and striking out three.
The Nighthawks are off tomorrow before returning home on Wednesday, hosting the North Adams SteepleCats at 6:30 P.M. It will be Superhero Night to benefit Children's Hospital at Dartmouth. Come dressed as your favorite superhero and help us raise money for CHaD. If you cannot join us at the ballpark, Patrick Cavanaugh and Matt Stewart will have all of the action covered on the NECBL Broadcast Network starting at 6:20 P.M.