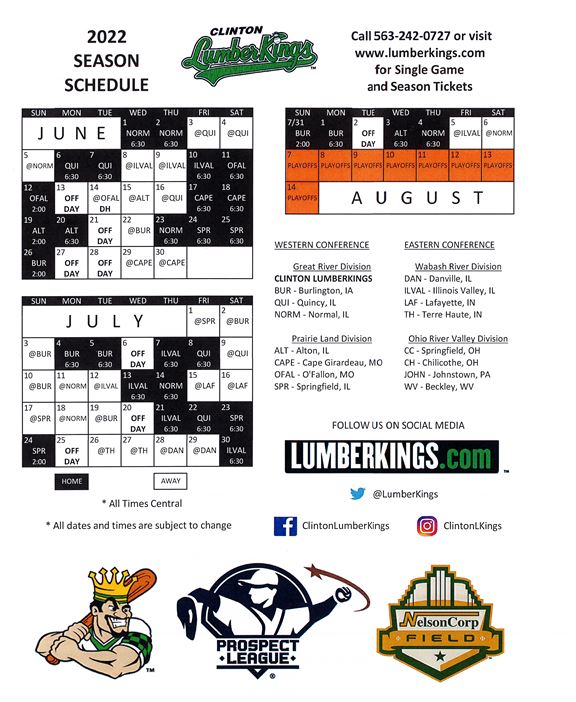 CLINTON, IOWA – The LumberKings will open their second season in the Prospect League on Wednesday, June 1st against the Normal CornBelters. Game time is at 6:30 pm. Clinton - in its inaugural season - defeated the CornBelters in the first round of the 2021 Prospect League playoffs.

"We are excited to head into our second season in the Prospect League here at NelsonCorp Field. Last season we lead the league in attendance proving that baseball is alive and well here in Clinton," stated Ted Tornow, General Manager for the LumberKings.

The LumberKings promotional schedule including giveaways, fireworks and post-game concerts, will be released at a later date.

The 2022 LumberKings schedule is on the following page, or it can be accessed by visiting lumberkings.com.

NelsonCorp Wealth Management has served the financial needs of others for more than 40 years, growing from three associates in a small Illinois office to 22 team members working in multiple locations. We now oversee branch offices spanning from Illinois to Hawaii. Our growth has allowed us to build a team of professionals with an excellent blend of experience and education so that we can deliver the best possible service to you. Degrees and attainments include CFP®, CPA, MBA, PhD, CLU, ChFC®, RFC®, RICP® along with other highly sought-after industry designations.

The Clinton LumberKings are preparing for their 86th season in operation. They play their home games at NelsonCorp Field - a park that has been home for the Clinton franchise since 1937. Since the club's inception, almost 300 former Clinton players have gone on to reach the Major Leagues. Advertising and tickets for the 2022 season are available by calling (563)242-0727 or by visiting lumberkings.com

About the Prospect League

The Prospect League (PL) is a 16-team Collegiate Wood Bat league with teams spread across the Midwest from eastern Missouri to western Pennsylvania. The season runs from June 1 to August 6th for a total of 60 games – 30 at home and 30 on the road. The league is split into two conferences, each with two divisions. There will be a first half and a second half champion in each division. Playoffs start on August 7th, the day after the regular season ends.