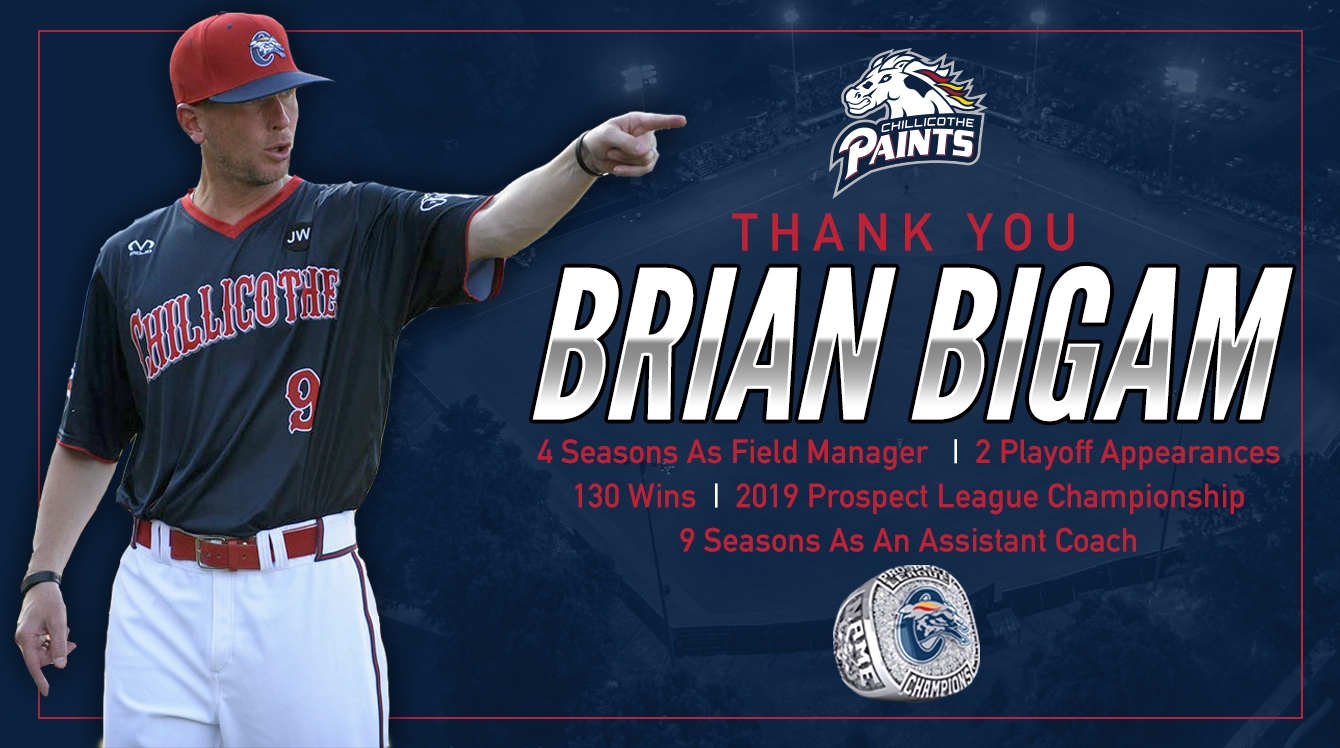 CHILLICOTHE, Ohio – Brian Bigam, field manager of the Chillicothe Paints since 2016, is stepping away from the position. Bigam has been a member of the Paints coaching staff for 13 seasons.

Bigam amassed a 130-117 record over his four seasons at the helm, guiding the Paints to a pair of playoff appearances and the 2019 Prospect League Championship, the second in club history.

“Coaching the Chillicothe Paints was a dream job for me,” Bigam said. “Never in my wildest dreams did I think I’d have the opportunity to be the field manager for such a long-standing and classy organization. To then be able to deliver a championship to the organization and fans made it that much more special.”

“Brian has been an integral part of our organization for many years. We will miss him leading our young men on and off the field,” said team president Bryan Wickline. “Brian is a first-class individual and always did what he felt was best for the Paints organization as a coach and field manager. We wish him well coaching his son’s summer team and support his decision to spend more time with his wife and children during the summer months.”

“I want to thank Bryan Wickline and the entire Paints organization for their unwavering support,” Bigam continued. “Coming to the ballpark every day is such a joy when you have ownership that cares about the players and coaches. The Paints Boosters are at another level. What they do for our players and coaches is unmatched! I want to thank the players as well. You’re only as good as your players and I’ve been blessed with tons of them thanks to Brian Mannino and their college coaches. Finally, I’d like to thank the best fans in the Prospect League. Nothing compares to the passion and love that these people bring to the ballpark on a nightly basis! For that, I’ll forever be grateful!”

“I would like to thank all of my assistants and Greg Cypret. The knowledge that Cyp possesses is unreal. I have learned so much from him about the game of baseball and will forever be grateful for that, but more importantly, Cyp is like a second father to me and the friendship that we’ve created is what I’ll be thankful for the most.”

“I also want to thank Jacob Wise. The coverage he provides for the coaches, players and fans is fantastic and professional. On top of this, he provides stats and insight that other organizations wish they could have.”

An announcement introducing the club’s 2021 field manager will be made in the near future.

The Paints have made the playoffs eight times and won two championships in 11 seasons since joining the Prospect League as a charter member in 2009. The Paints regularly lead the Prospect League in attendance, hosting an average of more than 2,000 fans per game last season as one of the most highly-attended collegiate wood-bat summer teams in the country. Advertising and season ticket information is available by contacting the Paints via email at paints@bright.net.