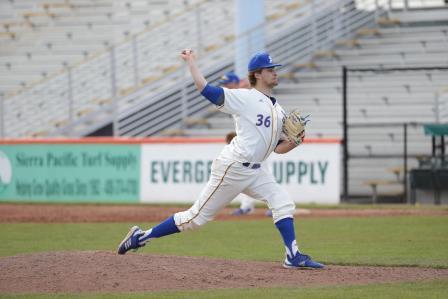 ELKVILLE, IL - The DuPage Pistol Shrimp have signed 6'7", 245 pound, right-handed pitcher, Jackson Ertz, from Danville, CA, a freshman at San Jose State to a contract for the 2019 season.

Ertz, a two-sport athlete at Monte Vista High School in Danville, was a three-time preseason All-American Honorable Mention by Perfect game (2016-2018). He led his team to a 2017 NCS Championship with a 4-2 record and a 2.50 ERA.

The 19-year-old Ertz, a 2018 high school graduate was ranked by Perfect Game as the No. 32 right-handed pitcher in California and the No. 100 ranked prospect overall and nationally ranked as a Top 500 prospect and the No. 311 right-hander in the country.

Scout's take - "Ertz has shown significant progress with an exceptionally large frame, with long arm action and throwing from an over the top arm slot. His fastball has been listed consistently topping out around 88 MPH, but he has the size and the arm strength to add to that before this summer and projects well on the mound as a starting pitcher. He has the potential and the makings to be that workhorse starter who can slot into the middle of the rotation and give the Pistol Shrimp quality innings."