Baseball / Week 1 Players of the Week 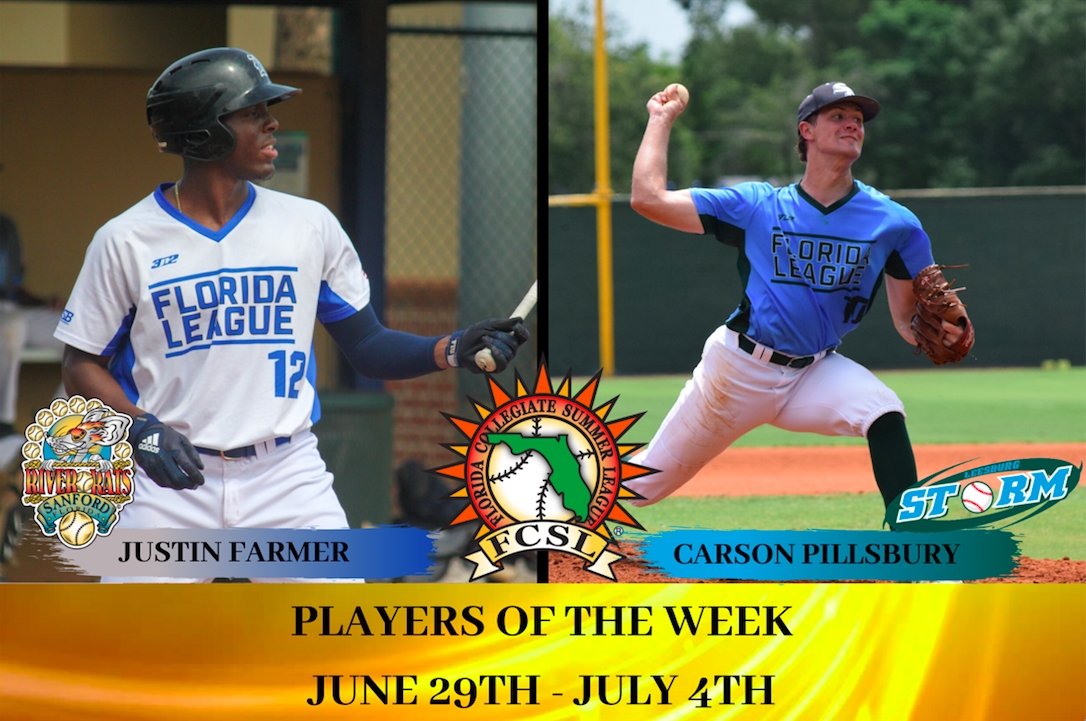 Farmer started off the season hot as he leads the league with 8 RBI’s. His game on July 1st alone against the Diamond Dawgs is a game that anybody would dream of having: 3-for-4 with two doubles, a home run, and five RBI’s.

Carson's first action against collegiate competition was spectacular. He drew the Opening Day start and dominated the DeLand Suns, tossing two innings of scoreless ball and striking out four. He earned a second victory against the Mavericks with two more scoreless frames.

Although Farmer and Pillsbury are going home with the League Awards from the first week, there were plenty of other stand out players. Here are the Team Awards Winners, first on the offensive side.

TEAM OFFENSIVE PLAYERS OF THE WEEK

Burke is back with the Suns for a third consecutive season, and he is a hitting machine. He has a hit in every game so far this summer, and he ranks first in the league in hits, third in batting average, and third in runs batted in

Alejandro was the most electric batter in the Lightning order during opening week. His combination of patience, power and speed catalyzed the squad's remarkable 4-0 start. In Leesburg's comeback victory against Winter Garden, he laced an RBI single late to tie the game, and drew a walk to set up the walk-off by teammate Gabriel Rincones.

Mejia was the spark-plug of the league's third-best offense in week one. He was just short of unbeatable, leading the team in hits and average in addition to being an absolute menace on the base paths. Jeff collected multi-hit games in his team's first two contests including a 3 for 3 outburst against the Lightning.

In his first three games with the Scorpions, Martin posted an unreal slash line of .714/.700/.857 as Orlando went 2-1. The Seminole reached base in seven of his ten plate appearances, which included a 3-for-3 performance against the Leesburg Storm. Martin has reached base at least twice in each of his three appearances.

McArdle has been a bright spot for the Mavericks offense. He recorded four hits and two RBI's to lead the Mavericks in both categories.

In just 2 games with the Loggerheads, he has gotten on base 5 times in his 8 plate appearances. He also showed off his speed going 3-for-3 in stolen base attempts.

Dunn has been one of the best hitters in the league. He has a hit in every game and leads the league in SLG%, 2nd in OBP, 2nd in ISO, tied for 2nd in runs, 3rd in runs created, and tied for 4th in BA all while having quite a few rain outs. He has been the definition of consistent and is an early MVP contender.

Lamarche has recorded one hit in every game with 2 or more at-bats, including a big 2 RBI single against the Mavericks that helped Winter Park win its first game of the season.

TEAM PITCHERS OF THE WEEK

Brucks made two appearances on the week for the Suns, which included two scoreless innings against undefeated Sanford. The SPC product added four outs in DeLand's first win of the summer, a 10-7 triumph over the Seminole County Loggerheads. Brucks logged half of his outs - five of ten - via the strikeout.

Sewell showed his stuff early and often in week one. The southpaw was especially effective against right-handers, challenging them with his blazing fastball. He was remarkably consistant as well, registering a pair of strikeouts in each outing.

The incoming freshman pitched twice this past week for the Scorpions, logging two scoreless innings against the Sanford Mavericks and one against the Leesburg Storm.

In his lone appearance on the mound this week for the Mavs, Layton worked 1.2 innings and got the save against the Orlando Scorpions. The righty allowed one hit and struck out two in the process.

Rossi only has 1 official outing in the books due to a suspended game against the Scorpions on July 4th, but it was just as dominant as his official outing on July 1st against the Mavericks. Rossi struck out the side in order for two consecutive innings, and it simply does not get any better than that.

Serrano was only able to pitch in one appearance but was able to strike out four of the 8 batters he faced in 1.2 innings of work.

Drummond appeared in one game and pitched all 2 innings he was allowed. In those 2 innings he struck out 4 batters allowing 0 hits and 0 runs

Allowed second fewest amount of hits by any pitcher who has thrown over 3 innings. T3rd in FCSL in strikeouts. Threw 1.2 innings of shutout baseball vs Lightning and Diamond Dawgs. Four of the five outs vs Dawgs were strikeouts.

Kutzer got the start against the Mavericks and kept them off the board through the first two innings, helping the Dawgs win their first game of the season.

We look forward to a lot more action this summer in the Florida League. Be sure to subscribe to FloSports to live stream our games, listen to the audio broadcasts on Meridix, and be sure to follow us on all of our social channels: Facebook, Twitter, and Instagram

River Rats Escape Squeeze to Move on to Championship Serie...

Lightning Punch Their Ticket to Championship Series with D...

Snappers advance to Round Two

Week 5 Players of the Week