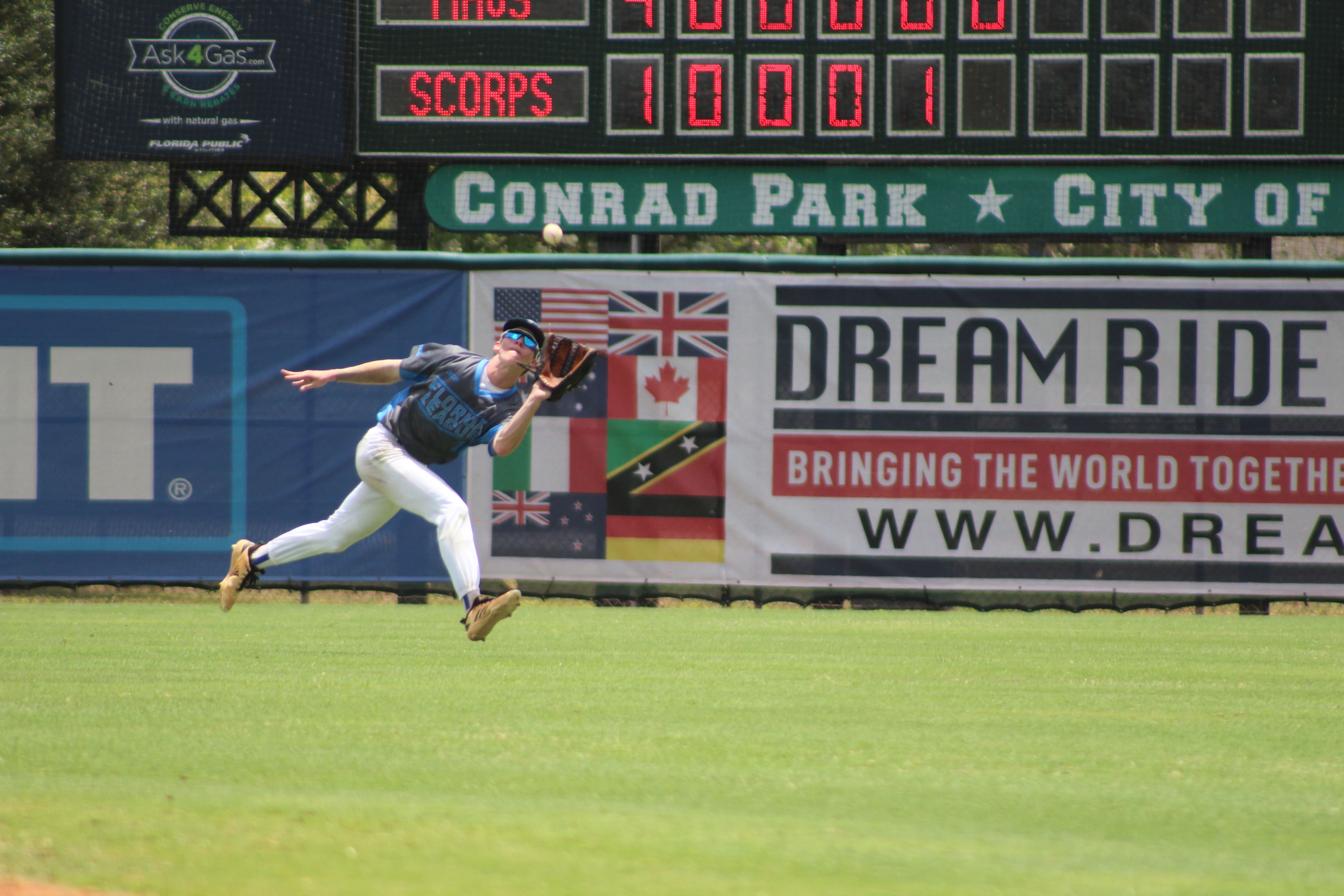 DeLand, FL - Despite a lengthy lightning delay postponing the Sanford Mavericks’ opening day game against the Sanford River Rats, the team was energized for Tuesday’s match against the Orlando Scorpions at Conrad Park. It was yet another closely contested contest for Orlando. After defeating the Winter Garden Squeeze by 4-1 on Monday, the Scorpions made Tuesday’s game another nail-biter.

Sanford struck hard in the top of the first. Three hits, a walk and an error propelled the Mavericks to an early 4-0 lead. Sean McArdle (St. Johns River State) and Joey Aden (Ohio State) both produced RBI singles, with McArdle, Trent Taylor (UCF), Jakob Runnels (UCF) and Jake Holland (Georgia Tech) all came around to score. The early lead was a huge advantage.

“It’s big, especially when we play teams this talented. The guys are able to play more relaxed. It can be a bit intimidating playing against these players from big schools,” Mavericks head coach Josh Montero said.

In a deep hole, the Scorpions responded in the bottom half. Jud Fabian (Florida) led off with a walk and advanced to second on a Robby Martin (Florida State) single. A hit batter pushed Fabian up to third, and he later scored off a wild pitch to reduce the deficit to 4-1. Relievers dominated from there on out. Sanford starter Julio Medina (West Virginia Wesleyan) struck out the side in the second inning, but Orlando reliever Nick Vieira responded with three strikeouts of his own over the second and third frames.

A few spectacular grabs were made in the outfield as well. In the top of the fourth, Fabian lunged forward to make an incredible catch on a Sam Rudd (Florida State) line drive.

An inning later, Rudd responded with his own amazing snag in the bottom of the fifth. With the bases loaded and one out,  Martin smashed a ball into left field and Rudd gave chase. At the last second, he slid and made a game-saving grab. Riley Wash (Pittsburgh) scored on the sacrifice but the other two runs never made it home, preserving the Scorpions lead at 4-2.

Orlando could not get any closer as Sanford hung on to win by that same score. Medina was credited with the win and Rollin Layton (University of the Cumberlands)  was awarded the save. McArdle, who was the only player with multiple hits in the game,  went 2-for-3 with an RBI and a run.

Overall, the Mavericks’ pitchers allowed just two runs off of four hits and struck out six batters. Montero said his team’s strong arms were a big reason why they were able to hang on for the win.

“We pitched really well. Our goal was to try and get to an 0-1 and 0-2 count as quick as possible and it worked.”

Those arms will be needed as the Mavericks (1-0) will play four more games over the next four days. The postponed contest against the Sanford River Rats is scheduled to be resumed on Wednesday. Meanwhile, the Scorpions’ (1-1) next game comes a day later against the Leesburg Storm at 11 A.M. at Conrad Park.