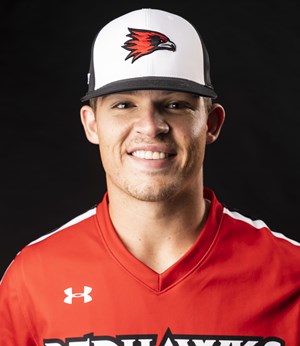 CAPE GIRARDEAU, MO - Braden Cox led the Cape Catfish in appearances (20) and according to one Prospect League insider, Cox was one of the most dependable arms in the League, in 2019 coming in out of the bullpen.

The definition of an unsung hero is one who does great deeds but gets little recognition, often the plight of a middle reliever at any level in baseball and in particular last season of Braden Cox, the 6'2", 205 pounds, right-hander from Scott City, Mo and a junior at Southeast Missouri State University, who was arguably the Catfish best pitcher in July.

In the heat of a pennant race, with the season in full swing and the players sensing the potential opportunity of making to the playoffs in the Cape Catfish's inaugural season, it was Braden Cox coming in out of the bullpen who more often than not shut down the competition, giving his team a chance to win by getting the ball from the starter to the closer.

In July, Cox appeared in nine games including making one start and posted a very impressive 3-1 record with a 2.95 ERA, while holding opposing batters to a .250 ERA, and putting up a 16 / 2 strikeout to walk ratio.

Cox would finish the year, leading the Cape Catfish in appearances, going 4-1 on the year with 2.73 ER, keeping the opposition at bay, striking out 28 batters while walking only seven on the year.

A junior at SEMO, Cox played one year at Three Rivers College, after graduating from Scott City High School, where he lettered in baseball, football, and basketball all four years. He finished his prep career with 280 strikeouts in 240 innings pitched while recording a 28-7 record on the mound.

Despite the fact that anyone hardly takes notice of the middle reliever, who rarely captures the fame associated with the starter or the team's closer, it was hard for even for the casual baseball fan not to notice the contribution that Braden Cox made to the Cape Catfish in 2019, clearly his dominating performance on the mound contributed significantly to the team's success last season.

COACHES CORNER - WHEN TO PULL THE PITCHER

THE HISTORY OF THE PROSPECT LEAGUE