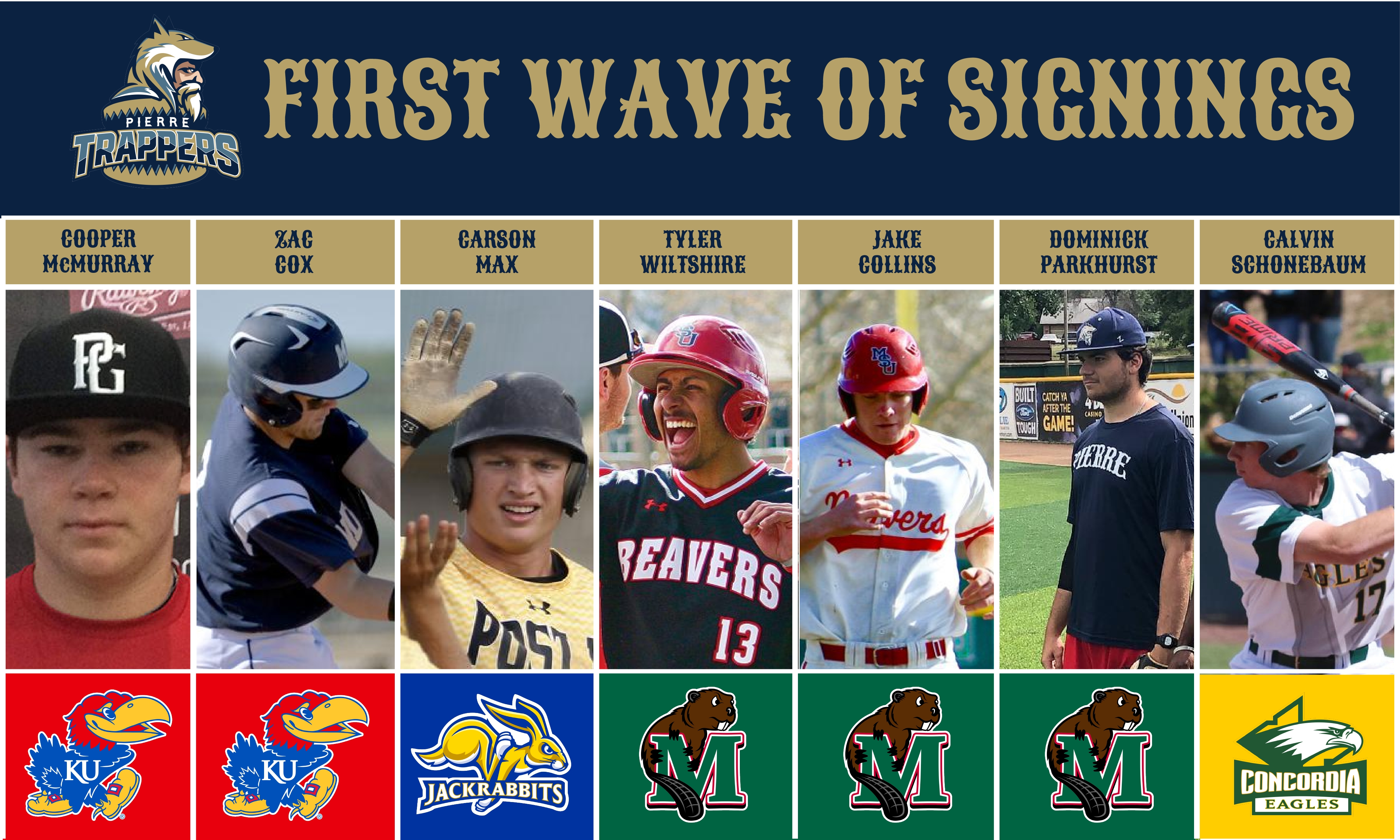 The Pierre Trappers coaching staff has been hard at work getting their roster put together for the 2020 season. With the offseason in full swing, they have announced their first seven player signings for the upcoming season. Here is a look at the new Trappers:

Zac Cox, Infielder, University of Kansas: Cox is a freshman infielder from Manhattan, Kansas who will be playing his first season with the Jayhawks this coming spring.

Cooper McMurray, 1B/OF, University of Kansas: McMurray is an incoming freashman who will join the Kansas Jayhawks in the fall of 2020, after this coming summer with the Trappers. He is from Tulsa, Oklahoma.

Carson Max, Outfielder, South Dakota State University: Max is a freshman outfielder from Mitchell, South Dakota. He will be playing hi first season with the Jackrabbits this coming spring. Many Trappers fans may remember him playing against Pierre Post 8 when he played for Mitchell Post 18 in South Dakota American Legion Baseball.

Tyler Wiltshire, UTIL/RHP, Minot State University: Tyler is a sophomore utility player/right-handed pitcher out of Minot State University. During his freshman year with the Beavers, Tyler played in 41 games and started 29. Along the way, he drove in 15 runs at the plate, scored 13 times, and logged four innings on the mound. He is from Tuscon, Arizona.

Jake Collins, Outfielder, Minot State University: Jake is a sophomore outfielder who hails from Littleton, Colorado. In 44 games (33 starts), Jake hit one home run, 11 doubles, and drove in 15 runs. He, along with Wiltshire, are teammates at Minot State with 2019 Trappers all-star pitcher Dominick Parkhurst.

Dominick Parkhurst, Right-Handed Pitcher, Minot State University: Speaking of Parkhurst, Dominick will be coming back to Pierre for a second season with the Trappers. In 2019, he pitched to the tune of a 3-3 record, to go along with 29 strikeouts and a 5.24 earned run average over ten appearances (nine starts). Over those ten outings, he racked up 46.1 innings of work. As one of the top pitchers in the Trappers staff, he was selected as an All-Star and pitched a scoreless innings at the All-Star Game held at his collegiate home field in Minot, North Dakota.

Calvin Schonebaum, OF/LHP, Concordia University-Irvine: Calvin is a sophomore outfielder and left-handed pitcher who hails from Parker, Colorado. In 21 games (11 starts), he hit .235 with one home run and six runs batted in for the Eagles. He also made six appearances on the mound, throwing 11.2 innings, striking out five, and recording three scoreless outings.