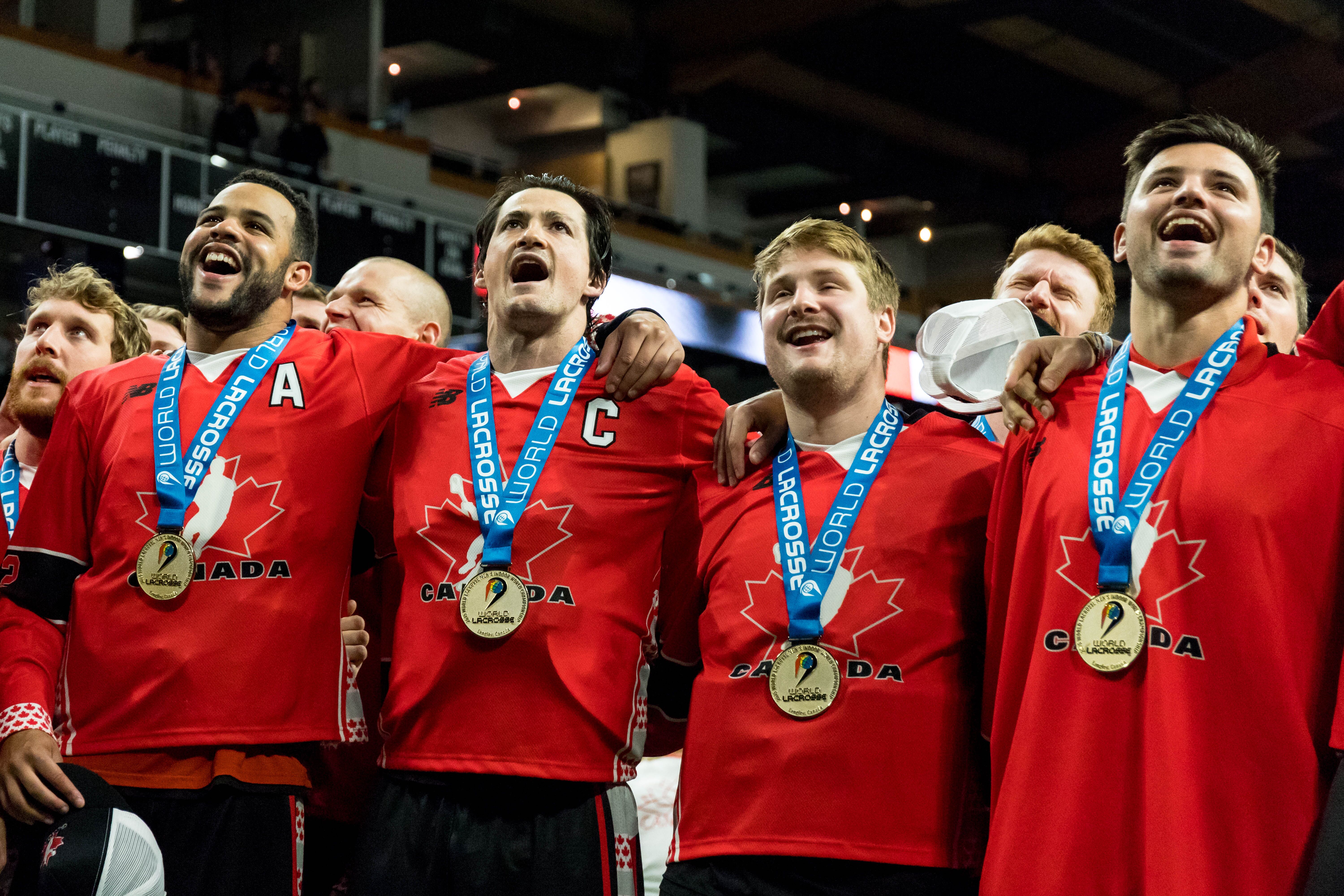 Langley BC – Canada captured its fifth consecutive championship title after a 19-12 win against Team Iroquois. It was a night of celebration for Team Canada, but not without tough competition from its opponent.

Within the first 19 seconds of play, Team Iroquois scored the first goal of the night. Canada quickly retaliated with a goal of its own minutes later.

The game went back and forth, the momentum continuing to shift between the two teams, throughout the first quarter. Canada was leading 6-5 going into the second quarter.

“We talked about it all along, no assumptions,” said Glenn Clark, head coach of Team Canada.  “We knew that they weren’t going anywhere and we were going to have to earn it all the way through.”

In the second quarter, Canada scored four more goals and allowed only one goal for Team Iroquois. At halftime, Canada was ahead 10-6.

Throughout the third quarter, Canada maintained its lead over Team Iroquois. Going into the final quarter of the championship game, the score was 14-8 for Team Canada.

Clark said much of Canada’s success leading up to the fourth quarter was due to the team’s game strategy. “We tried to stay out of the box and limit the transition and play more of a half-court game and I think that’s where our strength lay,” he said.

In the final 15 minutes of the game, Team Iroquois scored four more goals, but it was not enough to catch Team Canada. The defending champions got five more goals in the fourth quarter, including Curtis Dickson’s fifth goal of the night.

Dickson said the gold medal at stake and his Canadian teammates are what kept his scoring momentum going throughout the game.

“This is my third gold medal world championships and it never gets old. It’s always awesome getting to wear the maple leaf and represent your country,” he said. “These are very, very good players and you don’t get a chance to play with these guys very often so, when you do, you take advantage of it.”

Both Dickson and Clark were especially proud to capture the win on home soil.

“We have a lot of family here with the players and the staff so it always makes it extra special,” said Clark. “It feels great. You get to the point where you work so hard and it’s really a feeling of relief.”

This is Canada’s second win against Team Iroquois during the 2019 World Lacrosse Men’s Indoor World Championship. In spite of both games resulting in a 19-12 victory for Team Canada, Clark thought the final matchup was a stronger game with better flow and fewer power play goals.

“It was a game where both teams knew what was at stake and it kept the flow where it should be,” he said.

About the Canadian Lacrosse Association

Founded in 1867, the Canadian Lacrosse Association (CLA) is the governing body responsible for all aspects of lacrosse in Canada. Our organization is comprised of 10 Member Associations representing nearly 85,000 individual participants, including coaches, officials, and athletes of all ages and abilities. The CLA's mission is to honour the sport of lacrosse and its unique nation-building heritage, by engaging our members, leading our partners, and providing opportunities for all Canadians to participate. The CLA oversees the delivery of numerous national championships and the participation of Team Canada at all international events sanctioned by the Federation of International Lacrosse (FIL). The CLA is proud to be affiliated with partners that share the same vision and values, including our corporate partners - New Balance Athletics, Warrior Sports, NormaTec Recovery Systems, Canadian Red Cross, Westjet, RockTape, OPRO and Baron Rings - as well as our funding partners the Government of Canada, the Coaching Association of Canada, and the Canadian Lacrosse Foundation. For more information on Canadian Lacrosse Association and the sport of lacrosse, visit our website at www.lacrosse.ca and follow us on Facebook, Instagram and Twitter.