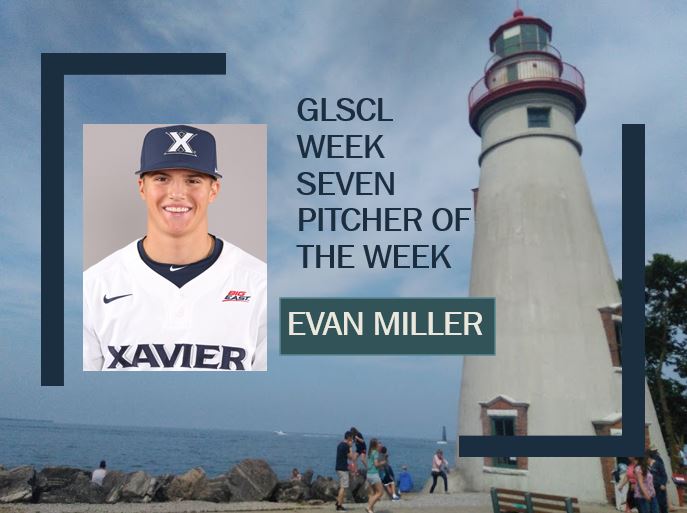 Our final weekly award winner to recognize this season is Evan Miller of the Cincinnati Steam. Miller was the GLSCL Week Seven Pitcher of the Week after a superb stretch at the mound.  He threw 6 1/3 innings over two games during the week. In that span, he had fifteen strikeouts and walked just two batters. Miller allowed just four hits and had a perfect ERA of 0.00. He earned the win in the Steam’s 10-4 victory over the Hamilton Joes.

Miller just completed his sophomore season at Xavier University. He made his collegiate debut with the Musketeers in a game against Florida State on the road. He threw a scoreless inning in that debut against the Seminoles – who were ranked fifth in the nation at the time. He led the team as a freshman by making appearances in 23 games. Miller comes from an athletic family – his sister was a dancer at Kentucky and his brother plays baseball for Wisconsin-Superior at the Division III level. And while he has had a high ERA so far through college – he has flipped it around since he joined the Steam.

Miller was a late addition to the Steam – but his presence certainly made a difference. He played in his first game on July 19th – after the All-Star Break. He came in for 4 1/3 innings in that game against the Joes, and the Steam won it 10-4 and Miller earned the win. After going two innings against the Settlers in a regular-season game, he would meet the Settlers again in the GLSCL playoffs. He threw two innings in that game as well – striking out three and giving up one hit. His total stats for his short but worthwhile time with Cincinnati were 8 1/3 innings pitched with 18 strikeouts, 3 walks, and an ERA of 0.00.

The Steam concluded their season after 5-9 and 1-3 losses to the Licking County Settlers in the semifinal round of the GLSCL playoffs. They had a 24-18 regular-season record. Miller will be starting his junior season with the Musketeers next spring.