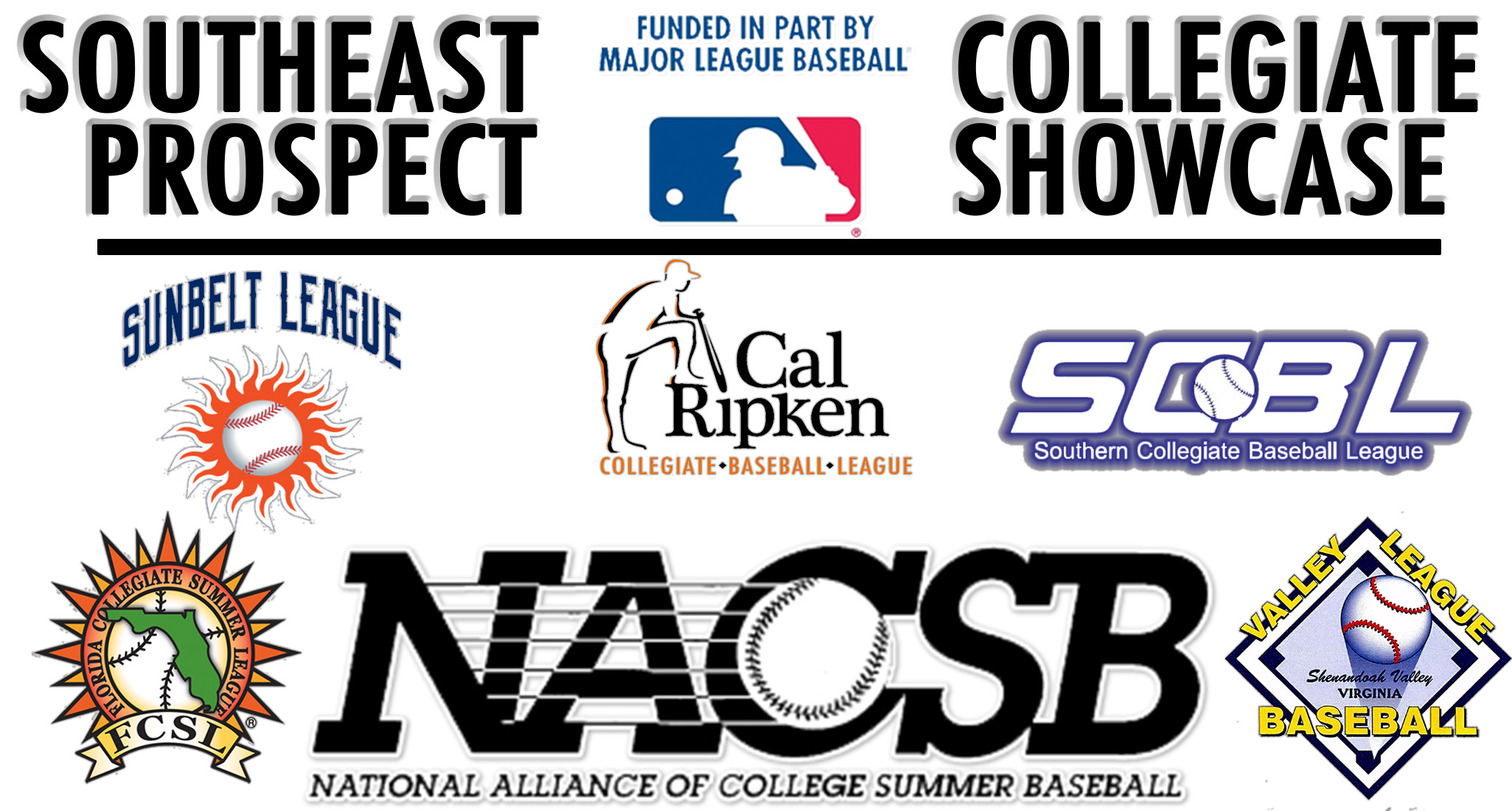 After consulting all six head coaches, the Florida League staff has selected thirty of the Florida League's top prospects to participate in the 7th annual Southeast Collegiate Prospect Showcase. This year's event will take place at the USA National Training Complex in Cary, North Carolina.

Starting in 2013, the Prospect Showcase gave professional scouts an opportunity to see the best players from the Florida and Sunbelt Leagues. For three years, the two leagues were the only participants. In 2016, the Southern League joined in, making it a two-day event. A year later, the Ripken and Valley Leagues were added to the mix. All five leagues are part of the National Alliance of Collegiate Summer Baseball. All leagues in the alliance are 501c3 non-profits, and are partially funded by Major League Baseball.

"The Prospect Showcase event has had a lasting impact on our league," remarked Florida League President Stefano Foggi. "It has given our players a valuable opportunity to be seen by professional scouts. More than half of players that we have sent to the event have signed professional contracts with Major League Baseball teams."

This year's roster will have all six Florida League teams represented. DeLand leads the way with ten players, followed by Sanford with eight. The Diamond Dawgs will send seven, the Squeeze and Scorpions will send two each, and the Lightning will have one. The roster includes fourteen pitchers and sixteen position players.

#7 Brock Myers, Tennessee Tech
Sanford
Myers has been a key piece out of the Sanford bullpen, making ten appearances. In 16.2 innings, he has struck out 17 batters, and allowed only one earned run for an ERA of 0.54.

#9 Victor Gotay, Keiser
Winter Park
Gotay is one of the hardest throwers in the Florida League, and will look to make an impact on the mound for the Florida League. He has a 3.00 ERA over 15 innings this summer, and has struck out 14.

#11 Brian Carruyo, St. Louis CC
Winter Park
Without questions, Carruyo has the been the most dominant reliever in the league this summer. He has appeared in 14 of Winter Park's 28 games, throwing 18 innings. He has allowed only one earned run for an ERA of 0.50 and struck out 28 hitters. He is 3-0, and also the league leader in saves with five.

#12 Quinton Martinez, Appalachian State
Seminole County
Martinez is a projectable left-hander who has a seven-inning no-hitter and a ten strikeout game to his credit this summer. In 24 innings of work, he has 26 strikeouts and a 3.00 ERA.

#18 Cole Beverlin, Florida State
DeLand
Beverlin was a 38th round draft pick out of high school, but chose to attend Florida State instead. He boasts a 2.42 ERA over 26 innings, and has a flawless 3-0 record on the year.

#19 Tate Stone-Frisina, Rollins
Winter Park
The junior right-hander has been phenomenal for the Diamond Dawgs this summer, posting a 1.84 ERA over 24.1 innings of work with 16 strikeouts. His wipeout slider has been an effective pitch, while also sitting in the low 90s with his fastball.

#20 Jack Wolgast, Southeastern
Winter Park
Wolgast has been the top-performing starting pitcher for the best team in the league. He is 3-0 on the year with a 0.88 ERA over 20.1 innings, including 20 strikeouts against only six walks. He has allowed only seven hits on the entire season.

#23 Austin Wood, Stetson
DeLand
Wood is a promising right handed pitcher out of Stetson University. He is coming off an injury, but will be healthy enough to play in the Showcase. His best pitch is his curveball, which baffled hitters all spring.

#26 Brady Choban, Marshall
DeLand
Choban is a flame throwing right hander from the Thundering Herd of Marshall. He has made eleven appearances for the Suns, and has 17 strikeouts in 17 innings of work. He is also second in the league in saves with four.

#27 Daniel Paret, Stetson
DeLand
Paret is the reigning Atlantic Sun Conference Freshman of the Year, and has been arguably the best starting pitcher in the league this summer. The big lefty is 3-0 on the year over six appearances, sporting a 0.94 ERA. He also has 33 strikeouts against only eight walks in 28.2 innings. Most impressively, the 15 hits Paret has allowed have all been singles.

#28 Tony Rossi, West Florida
Sanford
Rossi is the reigning Gulf South Conference Freshman of the Year after a great season for the Argonauts. His success has followed him to Sanford, where he has a 2.50 ERA over four starts, including 26 strikeouts in 18 innings.

#29 Ryan Stuempfig, Wichita State
Winter Park
The big right-hander has a perfect 3-0 record on the year, and also earned the start for the West All-Star team. He has a 24:4 K:BB ratio, and a 2.25 ERA over a team high 28 innings.

#30 Nick Cummings, Undecided
Sanford
Cummings was a late addition to the Rats' roster, and has been phenomenal in his five appearances. He has nine strikeouts through innings, and has an ERA of 1.12.

#31 Ethan Brown, Seminole State
Winter Garden
Ethan Brown is a projectable lefty on the mound who has great stuff. His only issue has been command. Still, the combination of a low 90s fastball and good swing-and-miss stuff (23 K in 20 innings) earned him a spot to be seen at the Showcase.

#5 Rodrigo Montenegro, St. Petersburg
DeLand
Montenegro has been efficient at the plate, with a .302 batting average and .531 on-base percentage. Without question, however, his place on this team is because of his defense. The sophomore backstop has an impressive 23 assists from the catcher position, which is eight more than any other catcher in the league.

#10 Luis Cabrera, Southeastern
Winter Park
Cabrera has been a force at the plate with a .386/.494/.543 slash line over 85 plate appearances in 23 games. He has only struck out eight times on the year, and has also added five doubles and two dingers.

#25 Christian Pregent, Stetson
DeLand
Pregent is only a few weeks past his high school graduation, but has shown tremendous potential this summer. He has three home runs on the season, and a 16:17 walk:strikeout ratio. He is also second in the league in catcher assists with 15.

#1 Dalton Shuffield, Texas State
Winter Garden
Shuffield was a huge part of Texas State's conference championship run, and has been the silver lining on a tough season for the Squeeze. He leads the league in hitting at .397, with 29 hits in only 20 games. Eight of those hits have gone for extra bases, and he also added a home run in the All-Star Game. His defense has been incredible to watch as well.

#2 Hunter Fornari, FGCU
DeLand
Fornari has used the past few weeks to change his summer, hitting three home runs since the beginning of July. He has 31 hits on the year, and has shown good wheels with a perfect 8-8 stolen base record. Fornari is also one of the top gloves in the league, and has the ability to play any infield position.

#3 Francis Villaman, FIU
Sanford
Villaman finds himself on the Prospect team for the second time, after also being named to the team in 2017. He has been a huge part of the River Rats' offensive success, with a .303 batting average and a .517 slugging percentage. He has seven doubles, four home runs and has driven in 22 runs.

#8 Daniel Carinci, Northwest Florida State
Winter Park
Carinci is having a solid season at the plate, hitting .250 in 25 games for Winter Park. He has three home runs, fourteen runs scored and five steals. His best asset might be his defense, as he makes tough plays look routine almost every game.

#14 Peter Hutzal, Marshall
DeLand
Hutzal has been a nice piece for DeLand, racking up nine extra-base hits in sixteen games. He is hitting .333, has an OBP of .435 and is slugging .588. He is a powerful bat from the left side, and has driven in 17 runs.

#15 Joe Burke, Kentucky Wesleyan
DeLand
Burke finds himself on the Prospect Time for the second time after being a member of the team last summer. He is up to five home runs on the summer, including two multi-home run games. He has played first base in every game for DeLand, and only has two errors on the year.

#22 Connor Allen, UCF
Sanford
Allen is a big first baseman, who is hitting a home run every twelve at bats this summer. He flashes a great glove at first base (only one error on the season), and gets on base at a .444 clip.

#6 Cage Cox, Valdosta State
Leesburg
For not having played baseball in over a year, Cox hasn't missed a beat. He is slashing .313/.432/.500 in 27 games, and has hit five home runs for the Lightning. In addition to his 30 hits on the year, he has also walked 20 times.

#16 Justin Farmer, FIU
Sanford
Farmer followed up a fantastic spring at Wallace CC (AL) with an equally impressive effort for the Rats this summer. He is slashing .369/ .474/.569, and has scored 18 times in twenty games.

#17 Gunnar Hoglund, Ole Miss
Seminole County
Hoglund was drafted in the first round in 2018 as a pitcher, but chose to attend Ole Miss. He plans on playing as a two-way player next year for the Rebels, and is using this summer to work on his hitting. Five of his twelve hits have gone for extra bases this year, and he has also added six steals to his ledger.

#21 Thomas Broyles, Missouri
Sanford
Broyles has turned his summer around over the past few weeks, slugging five home runs for Sanford. He has raised his average to .297, and is second on the team with 23 RBI. The lefty stick from Missouri has also walked more than he has struck out on the season.

#24 Jarrod Cande, Florida Southern
Sanford
By this point, everyone knows what kind of season Cande is having. It took him only half a season to tie the league home run record (9), and has also added nine doubles and two triples. He also leads the league in runs (25), RBI (27), and outfield assists (5).

Rick Hall of the DeLand Suns will act as the head coach for the team. He will be assisted by Rich Billings (Leesburg), Josh Montero (Sanford), Jim Newlin (Winter Park), and Jason Umberger (DeLand).

The team will arrive on Monday evening, and go through MLB's Product Development Pipeline testing. They will then play two games on Tuesday; against the Valley League at 9:30 am, and then against the Sunbelt League at 12:45 pm.

Carruyo Unanimous Choice for Reliever of the Year