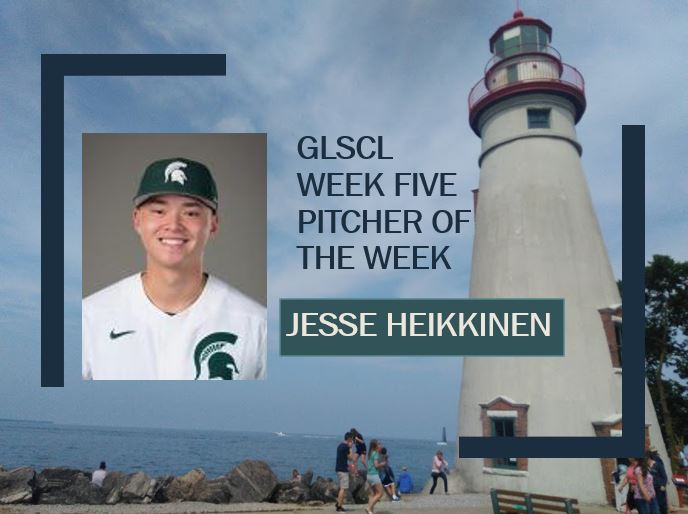 Jesse Heikkinen of the Lake Erie Monarchs was selected as the Week 5 GLSCL Pitcher of the Week. Heikkinen started in two games last week, throwing 10 1/3 innings. Over that span, he didn’t give up any runs while allowing just six hits. He threw thirteen strikeouts while giving up just three walks. He earned the win for the Monarchs when he threw 8 1/3 innings in a 4-0 victory over the Grand Lake Mariners.

A student at Michigan State, Heikkinen is originally from Holt, Michigan. The 6-0 junior chose to play for the Spartans over some other teams that also have many players in the GLSCL – Central Michigan, Michigan, Ohio, and Wright State. In his freshman season, Heikkinen pitched in ten games and started two of them. He had an ERA of 10.26, but he was able to settle in during his sophomore campaign. This past spring, he made fifteen appearances and started four of them and compiled a 3-2 record. His ERA dropped drastically to 4.60 and he threw many more strikeouts than the year before. Heikkinen’s parents both attended Michigan State, and it had always been a dream of his to pitch for the Spartans. Heikkinen is majoring in Business Management.

So far this season with the Monarchs, he is 2-1 with a remarkable 1.89 ERA. He has started all the six games he has pitched in and has amassed 35 strikeouts with just 9 walks. Heikkinen is 6th in the GLSCL in ERA and tied for 4th in strikeouts. After wrapping up a series against the Locos, the Monarchs will finish the week with a home series against the Graders.