Baseball / Getting to Know Austin Eifrid 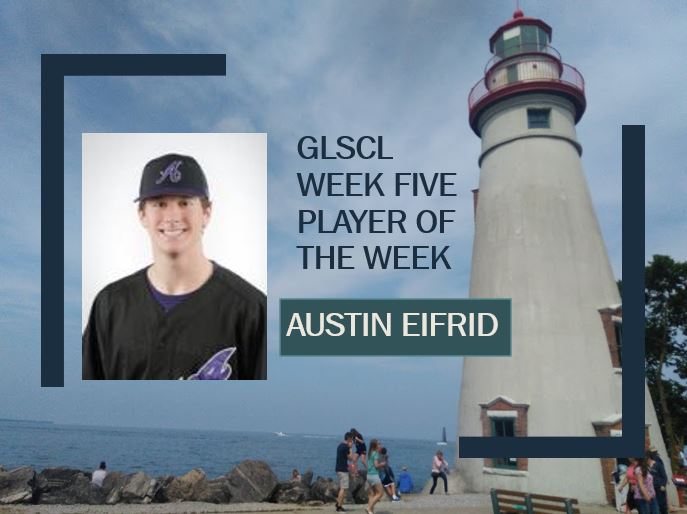 Austin Eifrid of the Muskegon Clippers recently earned the award as the Great Lakes Summer Collegiate League’s Player of the Week for week five. Eifrid had 11 hits and had a .458 batting average over his 24 at-bats across seven games this week. Two of those hits were doubles, and another two were home runs. He scored twelve runs and had ten runs batted in. He struck out just once this week, walked three times, and had six stolen bases. He was even hit by a pitch five times this week and was still able to show these impressive numbers on the stat sheet.

Eifrid hails from Lexington, Ohio and attends Ashland University. The 6-0 junior plays shortstop for the Eagles. In his freshman season, Eifrid played in 55 games and hit at a .283 clip. His statistics approved across nearly all categories by his sophomore year. In 63 games, he hit .356. Eifrid would eventually reach base about 50% of the time he stepped to the plate – his on-base percentage was .498. He had 78 hits and 29 walks. He had 62 runs and batted in 39 runs. He moved around the base path very well, stealing 19 bases throughout the season.

Eifrid was a part of a historic Eagles baseball team this season. Ashland’s 48-15 record tied their 2002 record for wins in a season, and their 1-2 record at the NCAA Division II World Series matched the best postseason in the schools’ history. They set a school record during the season by winning 17 consecutive games, and they also won their first 17 home games of the year.

Eifrid is hitting .349 this season with the Clippers in 23 games. His season was a little delayed since he was finishing up his college season with Ashland in the postseason. Eifrid has 30 hits, 18 RBIs, and 14 stolen bases. The Clippers have started a nine-game stretch of road games against the Graders, Mariners, and Monarchs before they conclude the season with a series against the Locos at home at Marsh Field. After July 8th, the Clippers sit at 15-15 in 4th place in the GLSCL North Division.