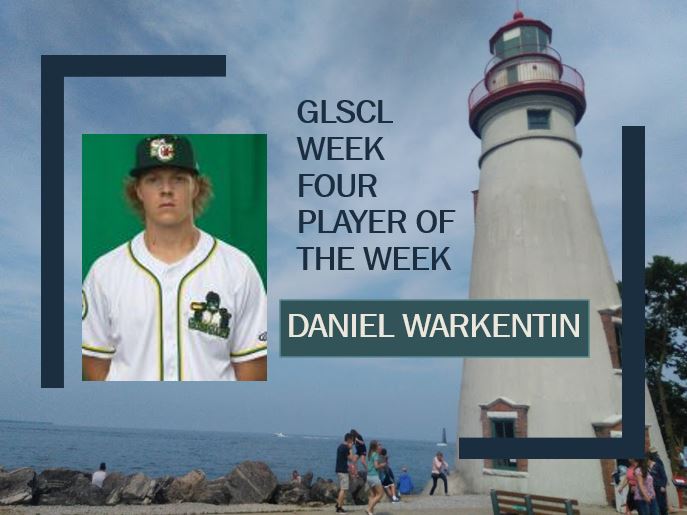 Daniel Warkentin of the St. Clair Green Giants recently earned a well-deserved GLSCL Player of the Week award for the fourth week of the season. Warkentin had an explosive week at the plate. In six games, he had nine hits. All nine of those hits were for extra bases – four were doubles, one was a triple, and four more were home runs. All these extra base hits ended up giving Warkentin 19 RBIs just for the week. Additionally, he scored seven runs, had three walks, and reached base after being hit by a pitch. Two of his home runs came on June 27th in an 8-5 win over the Scouts. Warkentin was 2 for 3 that day with a walk as well. Green Giants Co-GM Matt Sykes described it as one of the best weeks a Green Giants player has ever had.

Warkentin is an infielder for the Green Giants originally from Leamington, Ontario. The 6-4 junior attends Parkland Junior College in Champaign, Illinois and plays on the Cobras baseball team. In his sophomore season, Warkentin hit .323 in 50 total games started. He ranked second on the team in doubles (12), RBIs (43), and walks (29). The Cobras finished the year 38-17.

For the season so far, Warkentin is hitting .267 in 60 at-bats. 14 of his 16 hits have been for extra bases – six doubles, three triples, and five home runs. He has more triples (3) than he has singles (2). He has walked 11 times and has 24 RBIs to his name. Warkentin and Grant Richardson of the Cincinnati Steam are tied as league leaders in home runs with five apiece. He is tied with four others for the league lead in triples, he’s third in the league with 24 RBIs, and is tied for seventh in doubles. The Green Giants are 11-8 so far this season and sit in second behind the Lima Locos in the North Division. They were on a five-game winning streak from the 23rd to the 28th before losing to the Jazz on Saturday. The Green Giants had an off day on Canada Day and will be facing the Locos in Lima in a series that ends on the 4th of July.