Baseball / Jake Kates and Timothy Watkins - Co-Pitchers of the Week 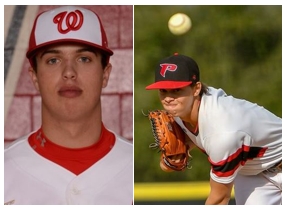 Week Two of the GLSCL season saw two pitchers earn weekly honors. The Co-Pitchers of the Week are Jake Kates of the Hamilton Joes and Timothy Watkins of the Xenia Scouts.

Jake Kates only threw in three innings this week, but they were outstanding. The relief pitcher had three one inning appearances where he faced nine batters and struck out eight of them while earning a couple saves. He gave up no hits, no runs, and no walks. Kates also had a nice week as a hitter – batting .318 with four doubles and eight RBIs.

Timothy Watkins threw a complete shortened seven inning game on June 13th in a 3-2 victory over the Settlers. He had fifteen strikeouts and no walks – averaging over two strikeouts per inning while earning the win. This came after a rough start to the season, but he is certainly on the right track now.

Kates is a 6-3 sophomore committed to Western Kentucky and is from Liberty Township, Ohio. Watkins is a 6-0 sophomore from Fort Lauderdale, Florida and plays for the Polk State Eagles. The Joes will have a doubleheader tomorrow against the Green Giants before facing the Locos and the Graders in this week of interleague play. The Scouts have a game left with the Monarchs before finishing the week against the Graders and Mariners.