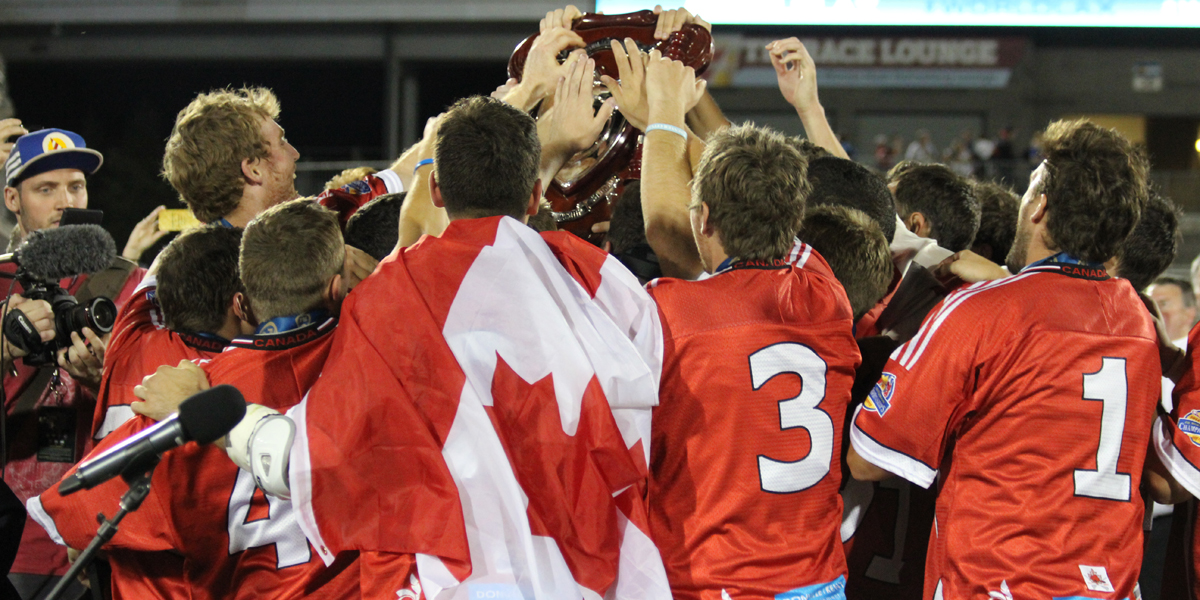 OTTAWA, ON – The Canadian Lacrosse Association (CLA) and the senior men’s national team coaching staff are proud to announce the 23-player roster that will represent Canada and defend our World Championship title at next month’s 2018 FIL Men’s Lacrosse World Championship in Netanya, Israel.
“We are really excited with the roster that we have selected and as a coaching staff are honoured to have the chance to lead this team at the 2018 World Championships,” said head coach Randy Mearns. “Canadian lacrosse talent continues to evolve and excel at the highest levels of the sport.  As a group, we spent a lot time working through our selection process and in the end obviously had to make some very tough decisions.  With so many elite level players in our pool, it was extremely challenging to bring it to the final 23, but now the journey begins."
The coaching staff – comprised of Mearns, Matt Brown, Taylor Wray, Merrick Thomson, Mark Miyashita and Jason Levesque - evaluated 46 players during a selection camp in October 2017. The player pool was trimmed by a dozen in February 2018, leaving 34 players on the training roster and in contention for the team.
“We feel we cover all of the bases – goaltending, face-offs, dual-purpose players, athletes that can perform a variety of different roles – and that this roster will allow us to compete for a gold medal in Netanya,” added Mearns.
This year’s team features 10 returning players from the Canadian squad that defeated the U.S. to capture gold at the 2014 World Championship in Denver, Colorado. Veteran national team members Geoff Snider and Brody Merrill, who will both be competing in their fourth World Championship (2006, 2010 and 2014), are joined by Wes Berg, Kevin Crowley, Curtis Dickson, Mark Matthews; siblings Jason and Jeremy Noble; and goaltenders Dillon Ward and Brennan Donville.
Tre Leclaire, Ryland Rees and Jeff Teat, who were all members of Canada’s 2016 U19 silver medal squad, will make the jump to the senior ranks. They will be joined by fellow youngsters and recent NCAA standouts Matt Gilray, Ian MacKay, Josh Byrne, Jake Withers and Zach Currier.
“Our roster has a good balance of age and experience. We’ve got veteran leaders that have been in these situations before and know what it takes, mixed with some youngers guys that have been playing high level NCAA field lacrosse and bring a youthful enthusiasm to the team.”
From July 12-21, 46 countries will compete at the 2018 FIL Men’s Lacrosse World Championships in Netanya, Israel. The U.S. and Canada are the only two countries to ever win the FIL Men’s World Championship, with the Canada claiming gold in 1978 in Stockport, England, 2006 in London, Ontario and 2014 in Denver, Colorado.
Please see below the full list of players, in alphabetical order of last name, named to the final roster:
About the Canadian Lacrosse Association
Founded in 1867, the Canadian Lacrosse Association (CLA) is the governing body responsible for all aspects of lacrosse in Canada. Our organization is comprised of 10 Member Associations representing nearly 85,000 individual participants, including coaches, officials, and athletes of all ages and abilities. The CLA's mission is to honour the sport of lacrosse and its unique nation-building heritage, by engaging our members, leading our partners, and providing opportunities for all Canadians to participate. The CLA oversees the delivery of numerous national championships and the participation of Team Canada at all international events sanctioned by the Federation of International Lacrosse (FIL). The CLA is proud to be affiliated with partners that share the same vision and values, including our corporate partners - New Balance Athletics, Warrior Sports, NormaTec Recovery Systems, Canadian Red Cross, Westjet, and Baron Rings - as well as our funding partners the Government of Canada, the Coaching Association of Canada, and the Canadian Lacrosse Foundation. For more information on Canadian Lacrosse Association and the sport of lacrosse, visit our website at www.lacrosse.ca and follow us on Facebook and Twitter.
For more information, please contact:
Alain Brouillette
Communications and Marketing Coordinator
Canadian Lacrosse Association
Phone: 613-260-2028 ext. 302
Email: alain@lacrosse.ca