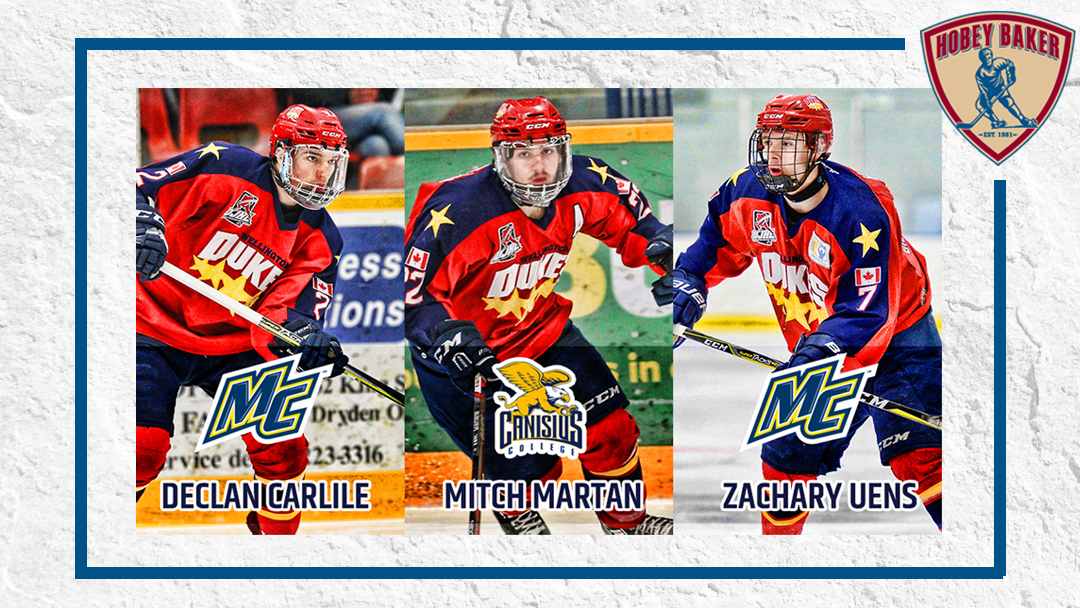 For years, the Wellington Dukes franchise has been known as one of the leaders in junior hockey for developing and graduating players to the next level of hockey. Every season, the Dukes announce commitments to the NCAA, U Sports and Semi Professional leagues around the world. Dukes alumni are continuing to make noise after their time spent in Wellington; with 3 former players being named nominees for the NCAA’s Hobey Baker Award, the highest individual honor awarded in Division 1 hockey.

Mitch Martan spent 2 seasons with the Dukes after starting his Junior career in the BCHL with the West Kelowna Warriors before being acquired during the 2016-17 season. The diminutive forward from Whitby, Ontario made an immediate impact for the Dukes and was a big offensive contributor and key piece of the Dukes run to the Royal Bank Cup Finals. His offensive skill set did not go unnoticed by NCAA programs south of the border. Martan ultimately decided to join the Canisius Golden Griffins program in Buffalo, New York. Martan has continued to excel in the NCAA and has seen his offensive output grow in all 4 years. This season, as a Senior, Martan has been a big part of the Golden Griffins offense, registering nearly a point per game and sits 4th in the Atlantic Hockey Conference scoring with 17 points (3 goals, 14 assists). Martan was very humbled when asked about being a nominee for such a prestigious award. “Obviously being recognized for this award is extremely humbling. The history behind it and the names of the previous players who have won it are pretty special. With that in mind, I wouldn’t be here without teammates and coaches and I can’t thank them enough. They’re the guys I go into battle with night in and night out so with any individual accolade, it’s important to realize that it only comes with the help of your teammates and team success”.

Declan Carlile was another member of the 2017-18 Dukes team that made a run to the RBC Cup Finals. The defenseman from Hartland, Michigan spent just one season with the Dukes before heading to the USHL to continue his development with the Lincoln Stars and then Muskegeon Lumberjacks. Carlile then joined the Merrimack Warriors NCAA program located in North Andover, Massachusetts for the 2019-20 season. Carlile has continued to improve season over season, not just offensively, but on the defensive end. To date, Carlile ranks 3rd in scoring on the Warriors team with 13 points (3 goals, 10 assists) and leads the team with a +14 +/- rating. Carlile also recognized his teammates and coaches when asked about being a nominee for the Hobey Baker Award. “It means a lot but I wouldn’t be anywhere without my teammates and coaches that have helped me exceed my game and make me a better player; all the credit goes to them”.

Zach Uens is the 3rd member of the 2017-18 Dukes team that gained recognition for the Hobey Baker Award. The Belleville, Ontario native is in his 3rd season with the Merrimack Warriors program and was drafted by the Florida Panthers in the 4th round of the 2020 NHL Entry Draft. The smooth skating defenseman has continued to develop his defensive game while at Merrimack and recently set an NCAA record where he was a +7 in a 7-1 victory over Brown University. "It's an honor to be nominated for the Hobey Baker Award, especially alongside two guys that I have played with before" said Uens when asked about his nomination.

Dukes Head Coach/GM Derek Smith had the opportunity to work with all 3 of these players during the 2017-18 season. Smith, a former NCAA Division 1 player himself, commented on what a big accomplishment being nominated for such a big award was for Martan, Carlile and Uens. “Amazing accomplishment for all three guys. It is a testament to how hard they have worked over the years to get where they are today. Marty (Martan), Decs (Carlile), and Uey (Uens) were all a big part of the 2018 Royal Bank Cup Finalist team. We are fortunate in Wellington to be part of their hockey journey and to help them get to where they are today.”

The Hobey Baker Award is awarded annually to the top NCAA men's ice hockey player in the nation. In addition to their performance on the ice, candidates must exhibit strength and character on and off the ice, contribute to the integrity of the team, display outstanding skills in all phases of the game and show scholastic achievement and sportsmanship. Former winners of the award include Cole Caufield, Cale Makar, Jack Eichel, Johnny Gaudreau and Paul Kariya.