Hockey / DUKES HEALING AHEAD OF SECOND HALF GRIND 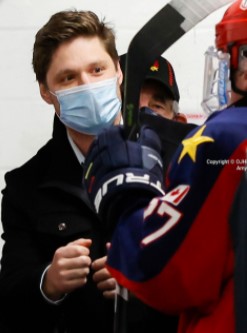 The Wellington Dukes aren’t going to let a three week pause slow them down in the second half of the Ontario Junior Hockey League season.

The OJHL, along with the Central Canada Hockey League and the Northern Ontario Junior Hockey League, were not included in the “elite” category of amateur sports leagues in the province when it was released as part of Modified Step 2 restrictions.

This is now the third straight season that has been affected, which Dukes head coach/general manager Derek Smith said is frustrating, as the league is one of the next steps towards NCAA, USports or OHL careers for many players.

However, he understands the need to combat the surge of the recent Omicron variant and get it under control so they can complete their season.

“There is a bigger picture that the government is trying to get a handle of,” Smith said.

“When we get back in two weeks, we're going to have a game every other day for a month, so we have to be ready,” he noted.

“It's all about the preparation they're doing right now, both physically and mentally back home.”

Smith said he and other representatives of OJHL teams are having discussions with league management and provincial representatives to turn Junior A hockey in Ontario elite.

Fortunately for Smith, he said he believes the announced return of school for Ontario students on Jan. 17 is a positive trend towards having the province lift restrictions on sport.

A silver lining with the pause, Smith noted, is to allow for injured players such as goaltender Matt Dunsmoor, Graham Dickerson, Liam Whittaker and Jacob Dietz to fully heal for the end of the season.

“There's been no team in the league that's had to deal with injuries the way we have this year, losing some of our experienced guys,” forward Barret Joynt echoed.

“Getting everyone healthy over this break has been an upside of having a couple of weeks off. When we're all back and healthy, and we're firing on all cylinders, I don't think there's a team in our league that can stop us.”

Following a somewhat shaky start, the Dukes went on the upswing towards the end of the first half, winning four games in a row to improve to 16-10-0-2 with 34 points, third in the East Division

The coach heaped praise on his veterans, including captain Emmet Pierce, Jacob Vreugdenhil, Joynt, Cole McGuire, Mason Reeves and Brodie McDougall, among others, for carrying the leadership load this season.

“They've been awesome for us all year in the locker room in practice pushing the pace,” Smith said.

“Without (regular season) hockey last year, it was a little bit of a learning experience at the beginning of the year for those guys to figure out that when you're our older guys and leaders, there's a standard you have to set every day, not just with work ethic, but with consistency. It's about setting an example for everybody.”

Joynt agreed that the team took a bit of time to gel at the start, as they got re-accustomed to each other and contact hockey.

“The big thing in our dressing room was finding our identity," he said. "When we started to find it and find what every guy can bring to the table every night individually, we started to string the wins together, which was huge for us."

The 18-year-old native of Sydenham, near Kingston, has been playing with Vreugdenhil and 17-year-old forward Harrison Ballard, who is on the NHL central scouting list and is committed to UMASS for next season.

He said playing with them has him develop his game and his mindset.

“(Vreugdenhil) has seen what it takes to get to the finals like he did in his 16-year-old year with Wellington,” Joynt noted.

“For Ballard, it’s just seeing what it takes to get to that next level, whether it's being looked at by NHL teams or Division I teams. They both bring it every night.”

Ahead of this week's trade deadline, Smith and the rest of the Dukes’ staff was busy firming their team up for what’s expected to be a busy two-month stretch drive

Prior to the Christmas break, the Dukes’ acquired 18-year old Erik MacNeil from the rival Cobourg Cougars and picked up 17-year old defenceman Creo Solomon from the Soo Thunderbirds at the deadline.

In his conversations with scouts and the Thunderbirds management group, he has heard that Solomon, who has racked up 15 points in 26 games this season in the NOJHL, could be future captain material.

“He wants to be a Duke. He's a hard-working kid that takes pride in winning his 50-50 battles, he plays with an edge,” can never have guys too many guys that have character like that and work ethic.

To make room, the Dukes have sent Jack Wolder back closer to home in Alberta, sent Belleville native Aaron Brown to the Green Bay Gamblers of the United States Hockey League, and shipped goaltender Carter Tahk to the Milton Menace.

If the pause ends on time, the Dukes’ will get thrown right into the thick of a busy schedule with four games in five days, including three at home versus the St. Michael’s Buzzers, Cobourg and the Trenton Golden Hawks on Jan. 27, 28 and 30.