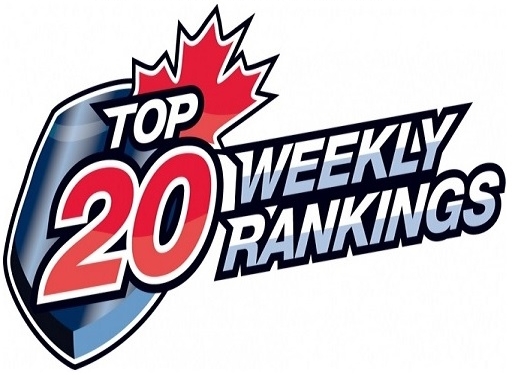 Selected weekly throughout the 2021-22 regular season, the rankings are provided by an independent scouting service.

Coming in at No. 1 this week are the Ottawa Jr. A Senators (CCHL).

Heading into a Monday matinee on the final day of the Central Canada Hockey League Showcase, the Jr. A Senators boast a 6-0-0-0 record in the 12-team loop.

Slotted second and third nationally are the Georgetown Raiders and Trenton Golden Hawks respectively, of the Ontario Junior Hockey League.

Both clubs are unbeaten to begin play in the OJHL to date and are among the perennial leading organizations in the 21-team league. The Burlington Cougars (12) and  North York Rangers (17)  complete the OJHL contingent in this week’s Top 20.

Tabbed fourth in the latest CJHL listings are the Truro Bearcats (MHL).

Truro has yet to taste defeat early on in the Maritimes and dating back to last season, the Bearcats have won 14 straight match-ups.

Meanwhile, the Timmins Rock (NOJHL) round out the Top 5 in the weekly rankings.

They have yet to lose in regulation so far in northern Ontario having gone 6-0-1-0 among the dozen squads that compete out of the NOJHL, and adding in last season, have picked up 27 of a possible 28 points in their past 14 contests.

The following are the CJHL Top 20 Rankings for this week:

ABOUT THE RANKINGS: The weekly CJHL Top 20 Rankings are compiled during the seasons by an independent scouting service and are determined using a variety of factors during the process.

ABOUT THE CJHL: The Canadian Junior Hockey League is a national organization comprised of nine Junior A leagues from Alberta to the Maritimes.  The CJHL currently represents 118 teams and well over 2,500 players. There are also 3,000-plus CJHL alumni furthering their hockey careers at the NHL, AHL, ECHL, SPHL, NCAA, U SPORTS and CHL levels across North America as well as leagues across Europe.  For latest CJHL news and features, visit cjhlhockey.com and follow on social media at @cjhlhockey & facebook.com/canadianjuniorhockeyleague.