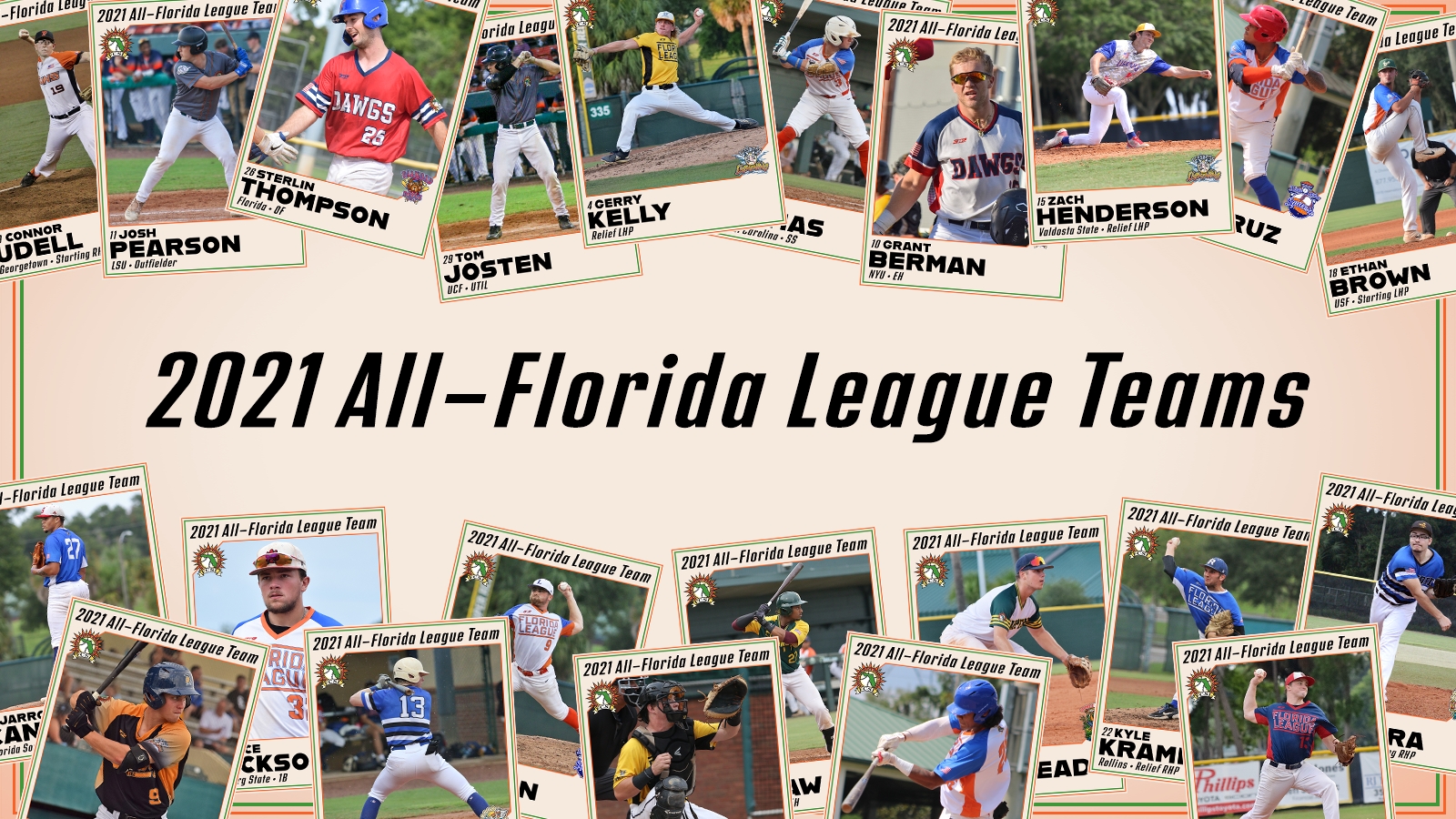 LONGWOOD, Fla.- The Florida Collegiate Summer League is pleased to announce the 2021 All-Florida League teams. The teams are broken up into first and second teams, and recognize the best players in the Florida League this season.

CATCHER: Clay Stearns (Troy)
Leesburg Lightning
Leesburg's starting catcher was just as good in the regular season as he was in the postseason. The second-year Lightning backstop hit .312 with 15 runs batted in during the regular season, then earned Championship Series MVP honors after logging three consecutive multi-hit games as Leesburg earned their first Florida League title in over a decade.

FIRST BASE: Bryce Jackson (Frostburg State)
Winter Garden Squeeze
In his third season with the Squeeze, Jackson posted easily his best campaign. The Frostburg State product, who was selected to both the All-Star Game and the Prospect Showcase, hit .333 for Winter Garden, hitting four home runs and driving in 17. All three totals ranked in the top five in the Florida League. Jackson's totals in extra-base hits, home runs, and RBIs were all the best of his three years in the Florida League.

SECOND BASE: Jeissy De La Cruz (New Orleans)
Winter Garden Squeeze
De La Cruz manned the second base position throughout the season for the Winter Garden Squeeze, and proved to be one of the league's best middle infielders. The Haines City native slashed .322/.430/.389 in his first season in the FCSL, driving in 12 runs and scoring 15 for the Squeeze. De La Cruz also had a stellar postseason appearance, going 3-for-5 with an RBI in the opening round play-in.

THIRD BASE: Jeslyn Whitehead (Rollins)
Seminole County Snappers
Whitehead proved to be one of the best contact hitters in the Florida League, posting the FCSL's second-best batting average at .343. The Rollins Tar reached base at a .405 clip, and recorded a .388 slugging percentage. Whitehead also climbed on the mound twice for the Snappers, working six innings without allowing an earned run.

OUTFIELD: Josh Pearson (LSU)
Sanford River Rats
As the leadoff hitter for the regular season champion Sanford River Rats, Pearson had one of the all-time great seasons for an incoming freshman in league history. The soon-to-be LSU Tiger led the FCSL in runs scored (30), hits (31), doubles (10), extra-base hits (14), and stolen bases (23). In addtion to posting a .333 batting average, Pearson logged a .456 on base percentage and a .570 slugging percentage.

OUTFIELD: Sterlin Thompson (Florida)
Winter Park Diamond Dawgs
In his 14 games with the Diamond Dawgs, Thompson set the FCSL on fire. The Florida Gator, who was playing his second summer in the Florida League, led the league with a .391 batting average, and also finished in the top three in OPS, on base percentage, and slugging percentage. Thompson drove in 15 runs in his 14 games in Winter Park, and helped the Dawgs to the Florida League Championship Series for the fourth time in five years.

OUTFIELD: Brett Kelly (UNC Greensboro)
Leesburg Lightning
Kelly proved to be one of the toughest outs in the Florida League, ranking third in the FCSL in batting average with a .338 mark. The Lightning outfielder, who was selected to the Florida League All-Star Game at midseason, had 22 hits in 22 games, and scored eleven runs for the eventual Florida League champions.

UTILITY: Tom Josten (UCF)
Sanford River Rats
For the second consecutive summer, Josten was a mainstay in the Sanford lineup, playing all over the field in his 28 games as a River Rat. The UCF Knight was Sanford's top run producer, logging 18 RBIs with 13 runs scored. Josten hit .282 with a .392 on base percentage, and finished the season with a slugging percentage of .400.

EXTRA HITTER: Grant Berman (NYU)
Winter Park Diamond Dawgs
Berman was the Florida League home run champion in 2021, belting five home runs for the Winter Park Diamond Dawgs. The NYU product also finished second in the league in runs batted in with 18. Berman posted a slash line of .280/.423/.537 in the regular season, and had a hit in six of the team's seven playoff games during Winter Park's run to the Florida League Championship Series.

STARTING PITCHER: Edward Berry (Swarthmore)
Winter Park Diamond Dawgs
Berry may have been the league's most dominant starter in the first month of the season. In his first four appearances, Berry allowed just one earned run over 19.2 innings, striking out 21 hitters in the process. He also ended his season on a high note, throwing six shutout innings in Game 3 of the FCSL Semifinals to send the Winter Park Diamond Dawgs to their fourth FCSL Championship round in five years.

STARTING PITCHER: Ethan Brown (USF)
Winter Garden Squeeze
Brown was perhaps the league's best strikeout-oriented starter, as the third-year Winter Garden lefthander struck out 44 hitters in 28.1 innings, one shy of the league's strikeout lead. The USF commit held opposing hitters to a .158 batting average, and twice struck out ten hitters in a win, all while not allowing a run on either occasion. In his final four starts of the regular season, Brown allowed just two earned runs in 22.1 innings with 34 strikeouts.

STARTING PITCHER: Jarrod Cande (Florida Southern)
Sanford River Rats
Before being selected in the 17th round of the MLB Draft by the Colorado Rockies and beginning his professional journey, Cande was the ace of staff for the Sanford River Rats. In four starts and 20 innings of work, Cande never allowed more than two earned runs, and struck out 24 hitters. Opposing hitters had a mere .167 batting average against the Florida Southern alum, who was the winning pitcher in three of his four starts, all of which ended up as Sanford wins.

STARTING PITCHER: Connor Udell (Georgetown)
DeLand Suns
DeLand's all-time leader in innings pitched had his best Florida League season in his fourth campaign with the Suns. The righthander, who will play his fifth year of college baseball at Georgetown after four years at Princeton, struck out 25 hitters in 24.2 innings, and posted a 1.82 earned run average. Udell did not allow an earned run in his final 12.2 innings of the regular season, and walked just one hitter in his final 8.2 regular season innings.

STARTING PITCHER: Demetrius Vizcarra (Pasco-Hernando)
Sanford River Rats
No qualifying starting pitcher in the Florida League had a better earned run average than Vizcarra, who posted a 1.19 ERA over his seven appearances. In five starts for the River Rats, Vizcarra allowed just three earned runs over 22.2 innings, striking out 16 hitters. The Pasco-Hernando Bobcat allowed all three of those earned runs in one outing, and ended the season with 11.1 consecutive innings without allowing an earned run.

RELIEF PITCHER: Zach Henderson (Valdosta State)
Leesburg Lightning
When the Leesburg Lightning gave the ball to Zach Henderson, it was game over. The Valdosta State product did not allow an earned run over 11.1 innings on the mound, and only five players were able to manage a hit as he racked up four saves. Henderson, who struck out the final batter of the Florida League Championship Series to give Leesburg the title, allowed just one run overall on the summer, which came in extra innings via the international tiebreaker runner.

RELIEF PITCHER: Gerry Kelly
Leesburg Lightning
Gerry Kelly was completely dominant out of the bullpen for the Florida League champions, making eleven appearances while allowing just two earned runs for the entire summer. The Pasco-Hernando product struck out over 40 percent of the hitters he faced, with 32 strikeouts in 19.1 innings of work. Kelly's ERA of 0.93 was the best among eligible pitchers in the league, a mark that saw him go nearly six weeks between runs allowed.

RELIEF PITCHER: Kyle Kramer (UCF)
Sanford River Rats
Kyle Kramer, in his second season with the River Rats, proved to be a shutdown option out of the bullpen for Sanford. In 12.2 innings of work, the former Rollins Tar and incoming UCF Knight allowed just five hits and walked just four batters, all while striking out 19. Kramer recorded a 2-1 record with a 0.71 earned run average, and held opposing hitters to a 0.71 WHIP and a .119 batting average.

RELIEF PITCHER: Jordan Winston (Lynn)
Winter Garden Squeeze
Winston anchored the back end of the Winter Garden bullpen, serving as the team's closer. The Lynn Knight appeared in nine games for Winter Garden, and earned the save on three occasions. Winston allowed just two earned runs over ten innings on the mound, good for a 1.80 ERA. The Winter Garden closer did not allow an earned run until July 17, and earned invitations to the FCSL All-Star Game and the Prospect Showcase.

TWO-WAY: Jeff Liquori (Florida Southern)
Sanford River Rats
Liquori was a valuable asset for the River Rats, both at the plate and on the mound. At the plate, Liquori drove in 14 runs and scored 12 more for Sanford, and posted a slash line of .250/.395/.324. He made three appearances on the mound, and did not allow an earned run over ten innings of work. The River Rats won all three games in which Liquori pitched, including a win on July 10 over Seminole County where the Florida Southern product allowed one hit over six innings.

The following players were recognized as the All-Florida League Second Team for their performances this summer:

Kevin Flay Honored as Randy Harvey Umpire of the Year