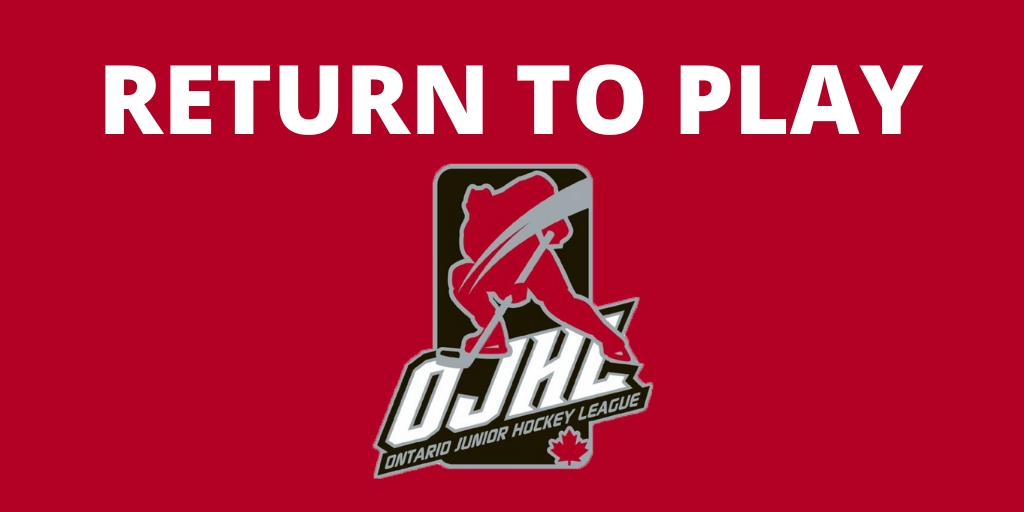 September 5, 2020, Mississauga, ON – The Ontario Junior Hockey League (OJHL) released an update today on the league’s plan for the start of the 2020-21 OJHL season.

The league has developed season schedules with start dates as early as October or November, 2020 with various other operational start dates dependent on governmental authorizations to fully commence.  The schedules vary in the number of games, league alignment, and playoff structure depending on the length of the season that the league will be able to play within the permitted timelines.

After working closely with Hockey Canada, the Canadian Junior Hockey League, the Ontario Hockey Federation, the Ontario Hockey Association, local health authorities and civic municipalities where our teams play and with our teams themselves and their respective organizations, the OJHL is pleased to announce that teams are heading back to the ice to start Phase 1 - Training - this week with a September plan that has been developed as part of the OJHL Return to the Rink plan.  Teams must follow all regional and local guidelines with the re-entry into the arenas.  As part of the OJHL implementation of the plan all processes will be reviewed and any required adjustments will be made moving into October.

“As announced on July 31, 2020 the OJHL will start the season once our governing authorities have granted permission to begin full games,” said Marty Savoy, OJHL Commissioner.  “The OJHL can appreciate that a number of Junior leagues have made decisions to not start until a determined number of fans are allowed in buildings, however this will not be a factor in the opening of the OJHL’s season.  The reality is that all leagues are in the same position regarding when we will be given permission to start our seasons and the goal of the OJHL is to be fully prepared to start once that permission is provided with the safety of our players and staff at the forefront of any return date.”

The league’s plan for regular season schedules include a full inter-league format to conference or divisional-only play.  Playoffs formats include the traditional 7-games series and 4 rounds to reduced games per series and possible single elimination.

Included in the OJHL’s return plan is a Parent and Player document that will be distributed to each player and family outlining the OJHL return processes that are required.

“The goal of the OJHL’s return plan has always been to get players back on the ice to continue their development with safety at the forefront of every step of the process,” stated OJHL Chairman Marc Mercier. “Our league has had weekly and monthly calls with our teams keeping them informed of our return plan. This includes meetings with our Athletic Therapist and COVID 19 Team Liaisons to ensure all teams are prepared and educated on the new processes that have been developed.”

Nickel City Nostalgia: Scott McCrory lit it up in differen...

Jacob Campbell back with the GHawks