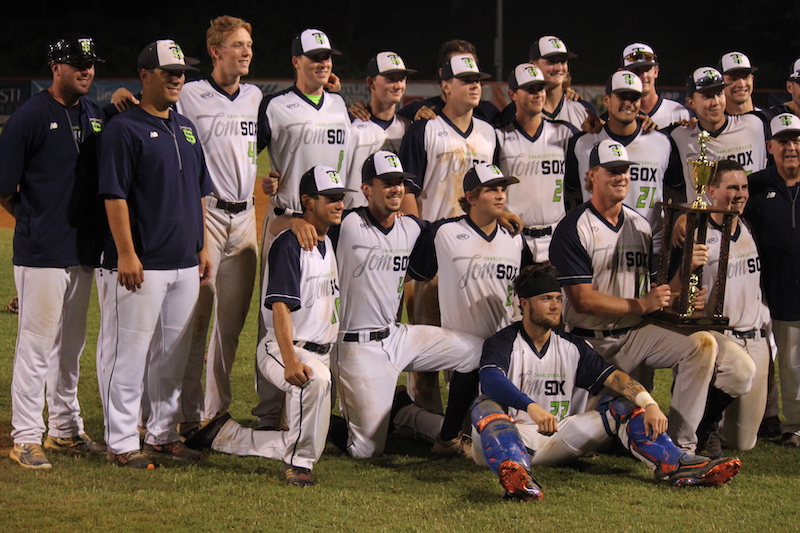 The Tom Sox got things rolling right away in the first inning, when the usual suspects got things started- Paul Giacomazzi and Thomas Francisco hit back-to-back singles off Strasburg starter Jordan Patterson. With one out, Dan Harwood drove a double to dead center, scoring Giacomazzi, and Parker Nolan brought Francisco home with a sacrifice fly, also to center.

They added another run in the second, when Ramon Garza and Brock Edge hit consecutive singles to lead things off. And then Giacomazzi singled to right to bring Garza home in a very, very close play at the plate.

After putting multiple runners on base but not cashing in the first three innings, the Express broke through with a run in the fourth against Sox starter Carden Mellown to cut the Sox's lead to 3-1. With one out, Holden Fiedler hit a chopper up the middle for a single, and after a pop up to second, Brett Hawkins hit an infield single to short. Griffin Cheney followed with a single to left center field to bring in Fiedler, for what would prove to be the Express's only run. Crawford relieved Mellown to stop any further damage.

The fifth and sixth innings crusied by with excellent pitching, but the Sox put another on the board in the seventh to go up, 4-1. Cal Greenfield hit a single with one out, stole second, and with two outs came home on a Francisco single to left.

The Express threatened in the eighth, putting runners on the corners with one out, but Crawford got Hunter Blalock to fly out to shallow center, and then with Brett Hawkins at the plate, Charlottesville's catcher, Greenfield, pounced on a wild pitch and tossed the ball back to Crawford covering home, and he put the tag on Zach Scott to end the inning.

Crawford, visibly throwing harder in the ninth, retired the Express in order, struck out Bryson Horne to end it ... and the dogpile was on, as the Tom Sox clinched the franchise's second title in the last three years.

Giacomazzi, Francisco, and Harwood all had two hits for the Sox, and Crawford was definitely the player of the game, coming through with 5 1/3 shutout innings in relief, allowing only four hits, no walks, and striking out five to earn the win.

The weather gave an appropriate coda to this season of rainouts, as a huge thunderstorm pounded C-Ville Weekly just as the trophy presentations ended, sending all remaining spectators scurrying to their cars.

Congratulations to the Charlottesville Tom Sox, our 2019 Valley League champions!