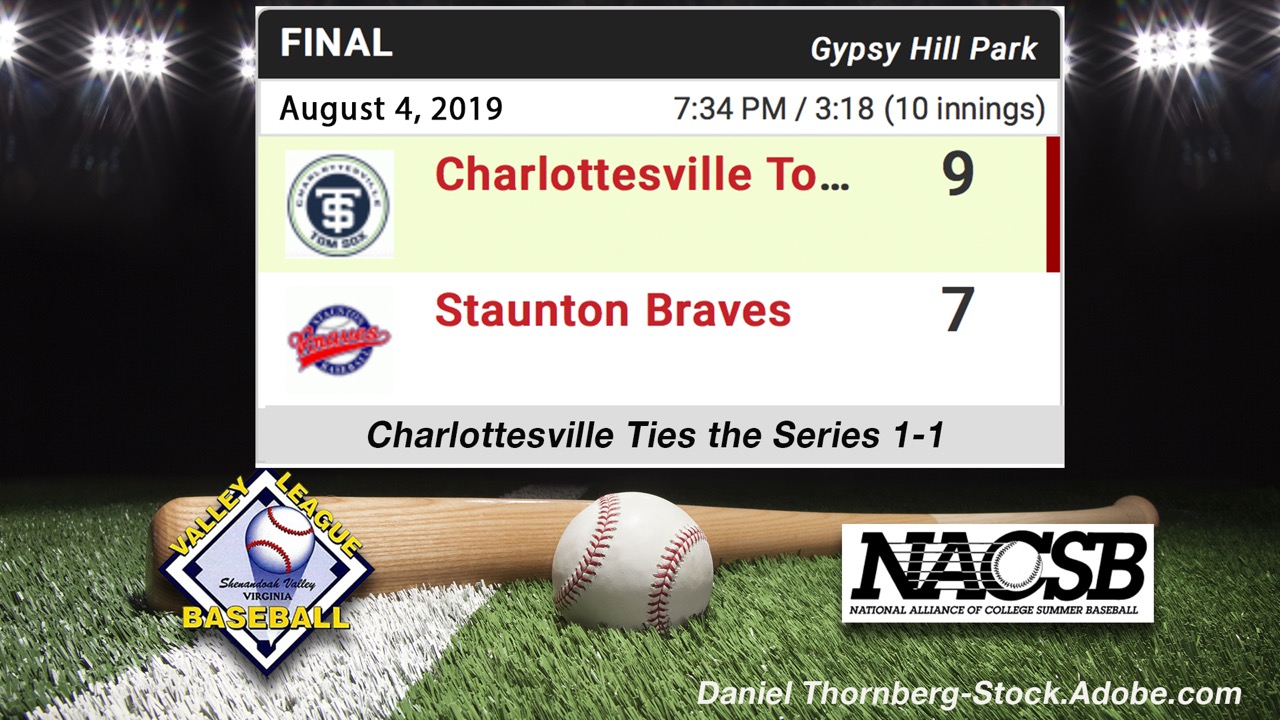 Playing with only ten available players, five of them pitchers, the Braves fought.. ahem... bravely, but the Tom Sox won the war of attrition, 9-7, in extra innings, to send the South finals to a final game Monday night in Charlottesville.

The Sox started off with a bang, scoring three runs on five hits in the first inning off Staunton starter Reid Celata. Trey McDyre singled in Cayman Richardson, Dan Harwood singled in Thomas Francisco, and Alex Fedje-Johnson doubled in McDyre to put the Sox up 3-0.

You would be forgiven if you thought the Staunton lineup, consisting of pitchers in spots 7-9, would roll over against Tom Sox starter Jaspar Carmichael, but in the second, after singles by Tyler Blaum and Callaway Sigler, pitcher Jaily Paredes launched a Carmichael offering far beyond the right-center field fence, tying the game at three. Paredes batted a total of three times in the regular season, and was without a hit. His grin crossing home plate may have been visible from downtown Staunton.

The Tom Sox kept the pressure on, and scored in the fifth to retake the lead, 4-3. With one out, Francisco walked (one of an incredible six times he was on base), moved to third on a McDyre double, and scored on a Harwood groundout.

The Braves grabbed the lead, 6-4, in the bottom of the sixth, scoring three runs on one swing for the second time. The big hit in this one was struck by Jacob Selden, a Tom Sox earlier in the season. His home run scored Kent Rooklin, who had doubled, and Celata, who had singled.

With the season hanging in the balance, Charlottesville battled back to retake the lead with three runs in the seventh, on only one hit... but the offense was aided by two Staunton errors and three walks. With Francisco on second and McDyre on first, Christian Hlinka hit a single to score Francisco, and Harwood and Fedje-Johnson worked walks to each force in runs.

Paredes struck again in the bottom of the inning, in a surprising exchange... with a fan. Seemingly out of the blue, a woman in the stands very clearly, and loudly, asked the young man to hit another home run. He was more than happy to comply a couple pitches later, launching his second of the game over the left center field fence to tie the game at seven.

That's where it remained until the top of the tenth, when a clearly exhausted Tanner James started his third inning of work for the Braves. With one out, Francisco doubled down the left field line, McDyre doubled him in, and then three consecutive walks to Brock Edge, Harwood, and Fedje-Johnson forced in another run.

The Tom Sox's Sam Crawford went out for his fourth inning in the bottom of the tenth, and snuffed any idea of a Brave comeback, striking out Tyler Dunn, getting Rooklin to ground back to the mound, and striking out Celata to end it.

Crawford earned the win with his four innings of relief (and six strikeouts), and James was saddled with the loss.

The teams will play Monday night (7 p.m.) in Charlottesville for the right to face Strasburg in the finals.