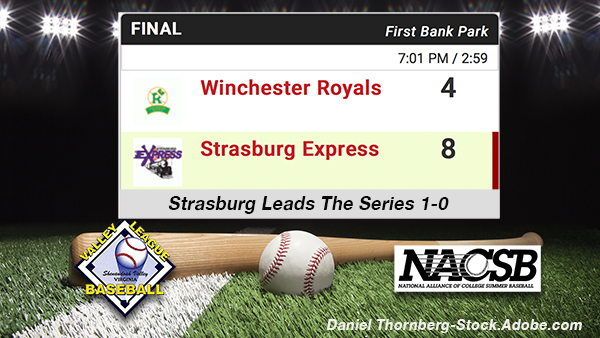 The old saying warns us that you can always see something new at a baseball game.

Well, last night saw the Generals, 6-0 against the Braves this summer, make a whopping four errors in the first inning alone (and two more after that) to allow Staunton to grab an early 3-0 lead- enough for the Braves to seize the advantage in the series.

The trouble started with one out in the first, when Staunton's Chet Moore beat out a slow roller to shortstop. He advanced all the way to third a few pitches later on an errant pickoff throw by Waynesboro's starter, Deven Judy. Andrew Czech followed with what would have been an RBI groundout... except that the ball was misplayed by both the second baseman and right fielder, and Czech ended up on second (still got the RBI).

Judy walked Callaway Sigler and Jacob Selden, loading the bases, and Czech rumbled home on a wild pitch, not on the pitch itself, but on the errant throw back to the pitcher after the pitch. Ryan McCarty also walked, and Logan Flood (no relation to Curt) brought in the Braves' third run with a groundout to third.

The Braves added a run in the fourth when Kent Rooklin singled with two outs, advanced to second on a walk, and scored when Czech (who else?) hit a single to bring him home.

The Generals closed to 4-1 in the fourth, when Connor Norby hit a long, ground-rule double to right (would have been a triple I think, had it not bounced over the fence) and scored on a Wes Clarke single. A comeback looked to be in the cards when the Generals added another run in the seventh. David Maberry took a hit-by-pitch up high, close to his head, and was immediately removed for a pinch-runner, Jackson Greene. Greene moved to second when plucky Andrew Kasiski (on his third Valley League team in two years) hit a single to right, and scored on a Kobe Lopez single.

However, the Braves put it away in the eighth with four more runs, one scoring on a Czech single, the second on a Selden single, and the third when Flood hit a fly ball to right that was dropped. Cameron Roof then hit a hard ground ball to third that Waynesboro's Connor Norby dove for, knocked down, and on his stomach, stretched out to grab the ball with his foot still on third base, forcing McCarty, but allowing the last run of the night to score.

While Reid Celata threw an effective 4 1/3 innings, Mitchell Guerreri received the win with 2 2/3 relief innings, and Eric O'Brien finished things off in the eighth and ninth. Judy was saddled with the loss.

The teams face off again tonight in the best-of-three series at Staunton, game time 7:30 p.m.

The Charlottesville Tom Sox used a balanced hitting attack to pummel the Lumberjacks in game one of the best-of-three series.

No less than five Tom Sox had multiple hits in this one, and the Sox scored twice in the second inning, four times in the third, and put the game away with three in the eighth.

The Jacks struck first, however, when Joe Fortin led off the game with a hit-by-pitch, moved to second on a Pedro Nazario walk, third on a groundout, and scored on a passed ball. Nazario came around to score when Matthew Cocciadiferro hit a grounder that was mishandled by the second baseman.

The 2-0 lead evaporated in the second, though, when Austin Mueller singled and was followed by a Dan Harwood home run for the Sox. Mueller was in the middle of it the next inning, too, hitting a two-run home run of his own to put the Sox up 6-2.

Cayman Richardson went 3-3 with a run to lead the Sox, while Thomas Francisco, Christian Hlinka, Mueller, and Alex Fedje-Johnson all had two hits as well.

Calyb King threw 5.1 innings for the Jacks and received the loss, while Jacob Haney got the win with 4.1 solid relief innings.

The teams face off in game two tonight in Covington, game time 7 p.m.

In a game of runs, the Woodstock River Bandits slipped past the New Market Rebels, 10-8.

The Bandits jumped on the Rebels early, running up a 8-1 lead through five innings. Aidan Nagle hit a solo shot in the first, Caleb Ward hit his own in the second, and Andrew Puglielli followed with a Little League home run (a triple plus an error), and Willy Escala tripled home Blake Way, who had walked.

Lael Lockhart led off the third with yet another solo home run, and Ward singled in Austin Bates. When the Bandits added two more in the fifth on a Puglielli two-run double, the Rebels seemed to be finished.

However, they rallied back with two runs in the sixth inning when David Smith and Ramon Machado singled in runs, cutting the lead to 8-3. The big inning for the Rebs was the seventh, when the team put up five runs on four hits and an error to tie it. The big blow was a Bryce Hulett two-run single, scoring both Joshua Cox and Nicolas Nolan, both of whom had singled.

Woodstock wasn't done, though. In the eighth, against New Market's reliever Sam Prince, Nagle tripled and scored one out later on a Bates double. Bates came around himself on a Ward double, putting the Bandits ahead to stay, 10-8.

Ward was 4-4 in this one, with two runs and three RBIs, while Bates and Escala each had three hits, and Nagle and Puglielli had two. The Bandits just continue to hammer opposing pitching.

Ryan Mitschele started and threw 5.2 solid innings for the Bandits, while Seth Comer got the win with a perfect seventh and eighth, and Conor Miller saved the game with a clean ninth. Prince received the loss for the Rebels, who used seven total pitchers in the game.

The Strasburg Express used five hits and two RBIs from Bryson Horne along with a strong start by Jose Torrealba to defeat the Winchester Royals in game one of their series.

The Express scored four runs in the second on four hits and an error. Griffin Cheney reached on an error, scoring Zachary Scott, and then three straight runs scored on RBI singles from Josiah Ortiz, Horne, and Brandon Henson.

The Express added two more in the fourth, thanks to a Tyler Johnson two-run home run, his first of the playoffs but tenth of the summer.

Winchester cut the score to 6-2 in the sixth on two solo home runs- one by Drenis Ozuna and one by John Dyer. The Royals scored two more the next inning when Ozuna came thorugh again, this time with a two-run single to right field.

The Express answered with two of their own in the bottom of the seventh when- surprise!- Horne singled home Garrett Evans, and Henson singled home Ortiz.

Torrealba threw an outstanding six innings to get the win for the Express, and Evan Rathburn finished things up with two shutout innings in relief. Logan Walters received the loss for Winchester.

The teams face off tonight in Winchester at 7 p.m. for game two.