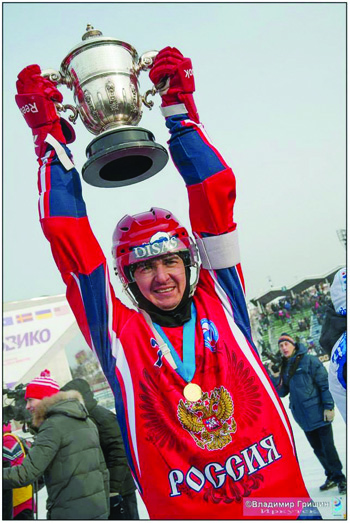 Sergei Lomanov Jr. is the world’s greatest bandy player. That may not seem like much to the average American, but any European knows the true depth and breadth that such a title holds. Bandy itself has been called the fastest game on Earth and thus, Lomanov would be the fastest skater on Earth, an impressive feat for a 34-year-old, who in the hockey world would likely be considered past his prime. Regardless of your familiarity or lack of familiarity with bandy, Lomanov’s ability to maneuver himself around the “big ice” is something every hockey player should work for.

Sergei Jr,. like his father before him, is a superstar in the bandy world. Currently, the Russian native plays for Yenisey, a bandy club from Krasnoyarsk, Russia, coached by none other than Sergei Lomanov Sr., who has also held the title of “world’s greatest bandy player.” With the Lomanovs at the helm, Yenisey has been named Russian bandy national champions, European cup champions and Bandy World Cup champions.

With the world’s greatest bandy player as your father, it is no surprise that Sergei Jr. has always taken his skating very seriously.

Lomanov attributes his father’s great bandy success to his own personal interest and determination in the sport.

“Even from a young age, my father took me along to his training. His team trained for hours and hours so I knew that is what it would take for me to reach the same level.”

When he was nine years old, Lomanov’s father signed a contract with a Swedish bandy club, where Sergei Jr. would join his first youth bandy club, selecting the No. 7 which his father had made famous.

“I always wanted to take after my father; he was the best player in the world back then and I aspired to reach the same height in sports that my father had already achieved.” 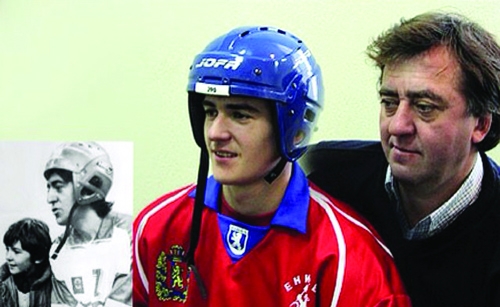 Bandy is a sport that requires great discipline and perhaps that is why Lomanov has risen to such success, even surpassing his father’s achievements. Unlike in hockey, in bandy a player is not successful based on their brute force or size, but rather by their stamina and skill; it requires certain finesse. From a very early age, Lomanov says, “My father showed me the price one must pay to perfect their skills.”

Together, father and son would analyze their skating styles, their body movement and their balance, spending no less than five hours on the ice together every day. What began as something that the two could spend their time doing together developed into something much more profound and meaningful. Player and coach, father and son, both of which are equally passionate about the game, so there are bound to be disagreements.

“We disagree, of course, but we agree to disagree. Our discussions help lead to a better understanding of bandy and how to improve the performance of the team as a whole, including our skating.”

As mentioned before, bandy in general requires a lot of skating, much more than hockey, given the size of the ice, the length of the shifts and the fact that players legitimately never stop moving. In any given game, bandy players can skate 6-8 miles, if not more. Perhaps this helps explain Lomanov’s commitment to his endurance training.

“In Sweden when I was young, I played bandy all winter long and continued training all summer long, while also playing soccer. My dryland training helped prepare me for the times I was on the ice, which was often for six hours at a time. I was skating much more than any of my peers at the time and this really helped me achieve ease and comfort on the ice. Now, I often find it more convenient to skate than walk.”

This is a sentiment that may be difficult to believe unless witnessed firsthand, something that USA bandy hall of famer Chris Middlebrook has had the opportunity to do several times.

“Sergei Jr. is the most amazing skater I have ever seen. He can have five or six players trying to stop him and he still controls the ball and comes up the ice with it. It is almost superhuman. I have never seen anything like it in bandy, not even from his father.”

This total comfort on the ice is something that can take decades players to develop. If nothing else, additional skating allows for greater familiarity with the ice, your own movements and how it can determine your role in the game. Even as Lomanov finds himself in the heart of his bandy career, the insatiable need to skate is more alive than ever. But he takes his preparation off the ice seriously too, all with the goal of maintaining his world-class endurance.

“I do lots of jumping exercises to help maintain agility and balance. After all, you seldom stand on two legs simultaneously on the ice. When we finish the season in April, the coaches allow us two weeks to rest. Our other break is in June and July. But during these times off, I swim, play tennis or football. A break off of bandy just means a change of activity for me. That way, when the season starts back up and we are training for five hours a day, I am prepared.”

This strict training regimen has certainly contributed to Lomanov’s success on the ice and the success of bandy players turned hockey players, as in the case of Carolina Hurricanes forward Alexander Semin who played both bandy and hockey for years.

“Bandy made it possible for Alexander to skate so well and gave him a better perspective on the rink,” Lomanov said. “In bandy, with more players on the ice, you have much more to pay attention to and you must be able to make decisions very quickly. Alexander has this ability and his endurance far outweighs other players. He does not tire quickly and knows exactly what is going on around him at all times.”

If you have not seen a bandy game or the way players move seamlessly along the soccer field-sized sheet of ice, then you may find it difficult to believe that there are skaters that surpass your favorite NHLer, but be assured it is true. And even if you are a diehard hockey fan, you will be amused and bewildered by the athleticism displayed during just one bandy game. While he may be biased, Lomanov says that bandy can create fans out of anyone.

“Even if you do not fall in love with the game immediately, you will come to love the game and what players are capable of doing. But do not take my word for it, bandy is one of those things that you must experience for yourself. You must come to the stadium, feel the cool air, hear the sound of skates hitting the ice and watch the game unfold.”

As a matter of fact, if you are looking for a chance to experience bandy for the first time, there is no better time than this Saturday, Jan. 10, at 4 p.m., as the U.S. National Bandy team faces off against Team Canada at the John Rose Minnesota Oval in Roseville. While it may not be like watching Lomanov skate circles around the Swedes in the world championship, it will be an enriching experience as you watch the best players that two countries have to offer.

Most Americans do not realize how fortunate we are to have access to this sport right in our backyard or how unique it is to witness an international bandy match just minutes from your home. And when you do come out for the game, take the opportunity to speak to the players about their journeys. You will discover most played high school and college hockey, and most still play in men’s leagues as well. Ask them how bandy has helped them develop as skaters, how it has it has forced them to be more creative, skillful and balanced.

Ask them who they aspire to be like on the ice and when there is an overwhelming number who respond back with Sergei Lomanov Jr., you will know exactly who they’re talking about.

Developing a passion for the game