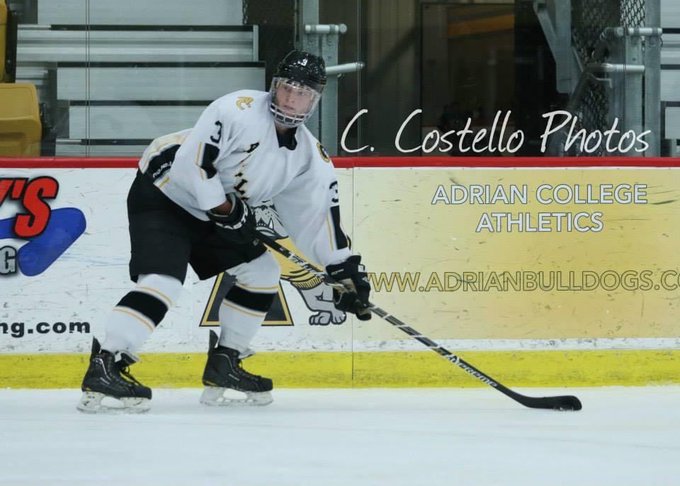 JACKSON – Patrick Campbell never met a stranger in his life.

The friendly presence of the former Jackson Lumen Christi standout was evidenced by his ability to strike up a conversation with anyone he came across. That kind of welcoming attitude helped him become a team captain on the Titans’ hockey team and a valuable member of the Lumen Christi boys golf and tennis programs.

The bright light to many has since dimmed, however, as complications that arose due to liver failure took Campbell’s life last week, leaving the entire Lumen Christi community in a state of mourning.

“It’s a huge loss for the entire Jackson area, especially the Lumen Christi community,” said Lumen Christi varsity hockey coach Mike Wartella. “For me, personally, it really hurts because I lost someone that I considered a friend. You don’t really expect someone that young to be taken away from you so abruptly, so it’s a painful time for a lot of people and my heart goes out to his family.”

Wartella attended a celebration of Patrick’s life at Our Lady of Fatima Catholic Church in Michigan Center on Tuesday in what was just a small glimpse into what he meant to the local community.

“It was just a tremendous turnout,” he said. “You can tell he meant so much to so many people and he touched a lot of lives. It’s just always a sad day when you have to say goodbye to a 24-year-old who had a full life ahead of him.

“He was the type of kid that, when he saw you, he always made sure he came over and said hello. We would chat for a few minutes every time we ran into each other and he was just the type of kid who could strike up a conversation with anybody. He was a great kid to have in any locker room and he will be missed by so many.”

Campbell played two years on the Lumen Christi varsity hockey team, scoring 57 goals in 52 games and adding 45 assists for 102 points. His senior year, Campbell tallied an impressive 38 goals and 24 assists in just 24 games to finish second all-time in program history for goals scored in a single season. He was voted team captain and offensive MVP by his teammates and earned second team All-State honors, as well as All-Conference accolades for his tremendous season.

He also set the program record for most assists in a single game with six against Holt in 2014 and his 62 points that season are seventh all-time in program history.

“Patrick was one of the best offensive players we have ever had,” said Wartella. “He was a big, strong kid at 6-foot-2, and he had one of the strongest shots from the blue line that we’ve ever had. He was also a great leader. He was one of our captains that season in 2014 and things didn’t go quite the way we had hoped to start the year. We struggled a little bit offensively, our goalie got hurt the second or third game in, so we were 1-6 through December.

“Our first game back from Christmas Break was against Okemos and we were down 2-1 with two or three minutes left and we were shorthanded, so things weren’t looking good. We managed to turn them over in their own zone and get a shorthanded goal to tie the game up and Pat immediately looked back at me and said, “Coach, we’re going to win this game’ and I started to believe that myself.

“A few shifts later, he was out there on the penalty kill and he stole the puck at the blue line and skated through the defense and scored with a minute left in the game to win it for us. That win really turned our season around. We ended up going 13-5 the rest of the regular season, but that was just a small example of what Pat was all about. He was always confident in himself and his teammates and that really motivated the rest of the team whenever he spoke up or made a big play on the ice.

“Everyone knew when Pat had the puck on his stick, special things were going to happen.”

Campbell went on to play hockey at Adrian College but would also make time to swing by a Lumen Christi hockey practice or game to chat with his younger brother, Owen, and instill some words of wisdom with the current players in the program.

“I got to see Pat quite a bit this past year or two because he was always coming around to games and practices. He always had great things to say to the current roster of guys to help boost them up a little bit and stay motivated during the longer grinds of the season.

“He pushed his brother quite a bit, along with Owen’s friends, because he wanted to see them keep working hard and improving on their games. He was a really good influence to have around the program and a lot of our current guys really looked up to him, because they knew he was a great player and a great teammate during his time at Lumen.”

“We lost a good one,” said Marcy Campbell, Patrick’s mother. “He lived a great life and always brightened up whatever room he was in. As parents, it’s crushing. He’s also got two brothers and they are devastated too. His funeral was incredibly touching. You would have thought he was a celebrity with the way people were talking about him and how many people came to show their respects.

“It was amazing to see how many people cared about Patrick and we feel blessed that so many members of our community have reached out over the past week to offer their support.”

Sports were always a part of Patrick’s life, according to his mother, and helped turn him into the young man he eventually became.

“He was honestly an athlete by nature,” said Marcy Campbell. “He was riding around on a bike at age two and it just seemed like everything came easy to him. He grew up playing baseball and hockey and he was honestly just as good at both sports. When he went to Lumen Christi, he wanted to play golf. So, he dropped baseball and picked up golf.

“He always loved sports and competition in general. Even after his high school golf career was over, he and his friends would compete at high-stakes golf scrambles and he’d bring in a good chunk of money just by winning those tournaments. I think what he loved most about sports though was the locker room and the players he competed with. He was always a very social kid and he just loved being around his friends and making people laugh.”

HAPPY 4TH OF JULY FROM THE ACHA!

Honoring The Legacy of Larry Brzeczkowski