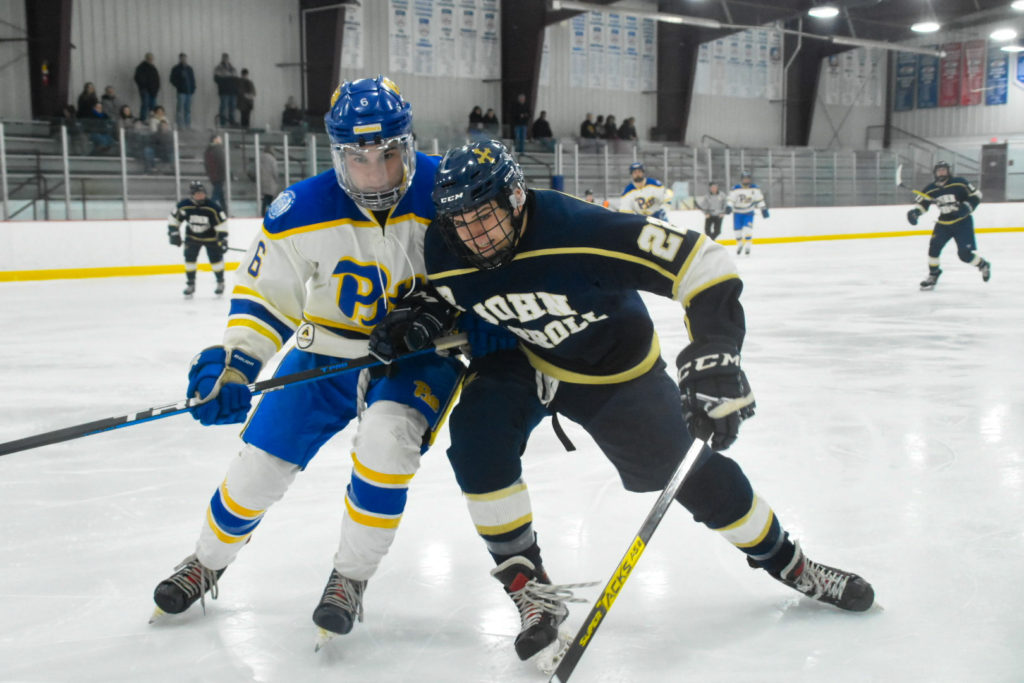 The regular season of the ACHA College Hockey Mid America conference has concluded and it is tournament time! The CHMA Tournament will be held at Alpha Ice Complex Friday, Feb. 28, 2020 – Sunday, Mar. 1, 2020.

Pitt clinched the regular season championship with a conference record of 13-1. The Panthers are 26-4 overall and currently ranked 18th in the country, though will most likely fall after losing twice to No. 6 Ohio last weekend. Pitt will play the lowest remaining seed from Friday’s first round games.

Robert Morris clinched a first-round bye with a conference record of 11-3, which includes two losses to Pitt. The Colonials will face the highest remaining seed from Friday’s first round games.

IUP holds the head-to-head tiebreaker over Slippery Rock, defeating the Pride twice during the season.

Who has the edge?
IUP seems to have the edge in this matchup. A goal differential of +11, compared to Duquesne’s -73, shows that the Hawks can score when they need to. IUP comes into the game with three excellent goaltenders: Tyler Kurtz, Jared Stahel, and freshman Danny Soltesz. While Soltesz only has four decisions, he is 3-1 with a team-leading 2.02 goals against average and team-leading 0.937 save percentage. Stahel and Kurtz are 7-6 and 8-4, respectively, on the season, with 3.12 and 3.57 goals against averages and 0.919 and 0.887 save percentages. All three goaltenders can lock down a win when it matters.

If the IUP goaltending can stifle the Duquesne offense, led by senior co-captain Sean Lloyd, who leads the team in points (41) and goals (26), the Hawks will be victorious and move on to the second round to play Robert Morris.

Who has the edge?
Despite Slippery Rock winning the season series against John Carroll this season, the Pride have been plagued by inconsistent play this season. Two of their last four conference games were 7-0 and 8-1 losses to IUP and Pitt, in which both starting goaltenders, Jon Syznalski and Kevin Belanger, were chased from the two games after allowing seven and five goals, respectively.

The inconsistency on the part of Slippery Rock to not only score goals, but to keep their opponent from scoring, keeps this matchup a toss-up. The home-and-home weekend series against Mercyhurst is a classic example. After defeating the Lakers 7-1 on Friday, Jan. 17, it took overtime to win 4-3 the very next night. The Pride are also the only conference team to defeat Pitt during the regular season, but fell in the second game against the Panthers, 8-1. They swept West Virginia, but by scores of 6-3 and 3-2, but were also swept by Duquesne. Depending on which Slippery Rock team shows up at Alpha Ice Complex on Friday night, the Pride could either skate into the semifinals or take the long bus ride back to Slippery Rock.

Similarly, John Carroll has not has luck stringing conference wins together. After falling to Robert Morris 7-1 in the conference opener, the Blue Streaks defeated Duquesne 8-4. After that, they alternated losses with wins, finishing the first half of the season with a 4-5 record. John Carroll then went 1-4 to end the conference slate and finish 5-9. If last season’s conference tournament opener against Slippery Rock, which ended with a 4-3 victory for the Pride, was any indication, this rematch is anybody’s guess.

Original Article can be found at http://burghhockey.com/acha-college-hockey-mid-america-playoff-preview/