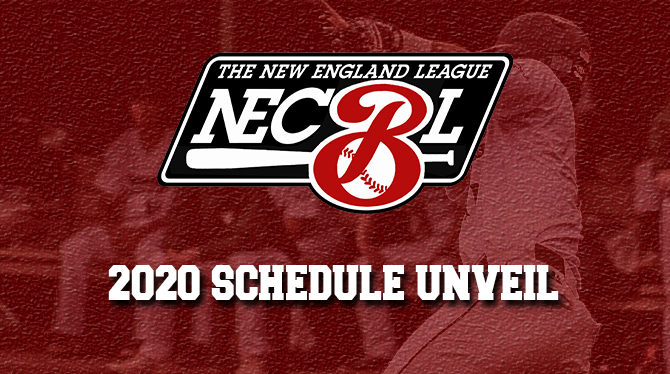 Among the Opening Day schedule highlights are the 2019 Fay Vincent Sr. Cup champion Keene Swamp Bats, who won their fifth league title last summer, raising their banner at home against the only organization with more titles – the Newport Gulls – to commence a five-game, 10-team slate to fire off the 2020 season.

Other teams in action on Day 1 include North Adams hosting Sanford; a Green Mountain State rivalry clash between Upper Valley and Vermont; Danbury welcoming Ocean State; and the league’s newest addition – the Bristol Blues – traveling to Winnipesaukee to usher in their NECBL era.

With the addition of Bristol – who play their home games at the nearly 5000-seat Muzzy Field – the New England League once again returns to the heart of Connecticut, as the Blues represent the third time an NECBL organization has forayed into the suburban Hartford area: the Bristol Nighthawks played during the league’s first two years (1994-95) before the Bristol Collegiate Baseball Club did so in 2010 before moving to Mystic.

The return of Bristol also means that the Constitution State now has three teams in its boundaries alongside Danbury and Mystic, two of the oldest organizations in the league. Only Massachusetts can claim having as many NECBL teams in one state.

As Bristol enters the NECBL fray, the league’s divisional realignment will slightly shift for the 2020 season, as the Valley Blue Sox will move from the North to the South Division, leaving the former with six teams and the latter with seven. The North Division will be comprised of the Keene Swamp Bats, the North Adams SteepleCats, the Sanford Mainers, the Upper Valley Nighthawks, the Vermont Mountaineers and the Winnipesaukee Muskrats. The now-seven-team South Division contains the Bristol Blues, the Danbury Westerners, the Martha’s Vineyard Sharks, the Mystic Schooners, the Newport Gulls, the Ocean State Waves and the Valley Blue Sox.

The New England League will continue to employ a balanced/unbalanced schedule format depending on the division, and all teams will play 44 regular season games overall. Teams in the North Division will face each divisional member six times (three home and three road games), and will play each team from the South Division twice (one home, one road). Each team in the South Division will play two other in-division teams six times, and the remaining four teams five times, for a total of 32 games, plus the two games against each of the six South Division teams (12 games – one home, one road vs. each team) for a total of 44 games.

The Newport Gulls will play host to the 2020 NECBL All-Star Game on Sunday, July 19, 2020 at historic Cardines Field in Newport, Rhode Island, marking the fourth time the Gulls have hosted the NECBL All-Star Game and first time since 2016. The All-Star Game showcases the NECBL’s top talent in a fun-filled afternoon and evening of the best the league has to offer – with players from all NECBL organizations showcasing their skills in front of scouts from every Major League Baseball (MLB) organization.

After that, each of the league’s 13 teams will play the final weeks of the regular season with a new wrinkle to the schedule format, as every contest will exclusively pit division opponents against one another, thus making for a competitive finish to the season to determine the postseason qualifiers.

The 2020 NECBL Playoffs will feature the same format as recent years; six teams total will qualify for the postseason, with the winners of both the North and South Divisions each earning first-round byes. The No. 2 and No. 3 seeds from each division will square off in a winner-take-all NECBL Wildcard Game; the victors will take on the No. 1 seeds in the best-of-three NECBL Divisional Finals before the last two teams standing face off in the NECBL Championship Series in another best-of-three format that will determine the winner of the Fay Vincent Cup.

The final games of the regular season will be held on Saturday, Aug. 1, with the following day (Aug. 2) open for makeup games before the postseason begins on Monday, Aug. 3.

Additionally, the New England League is excited to announce the expansion of its relationship with Trackman to six ballparks with plans for more coverage in 2021. Trackman is a 3D Doppler radar system that precisely measures the location, trajectory and spin rate of hit and pitched baseballs. This combination of measured (radar) and derived (traditional) data gives users the most unique perspective in baseball on every play tracked.

Finally, the NECBL will also be hosting two special exhibition games this summer. Martha’s Vineyard will host the United States Military All-Stars on June 30; and Bristol will play Team Israel at Dunkin Donuts Park – home of the Double-A Hartford Yard Goats – on July 16.