Baseball / Back to Bristol; New England League Welcomes Bristol Blues to League for 2020 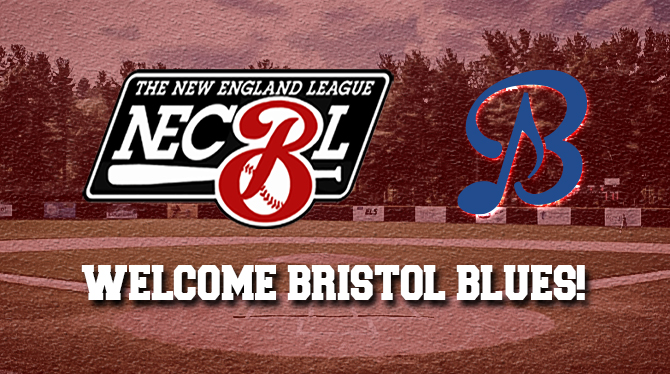 NORTH ADAMS, Mass. – For the second consecutive year, the New England Collegiate Baseball League is growing; but unlike last winter, when the league announced its expansion to the unfamiliar waters of Martha’s Vineyard, the league’s latest addition is a familiar destination, as the New England League will return to Bristol, Connecticut, with the addition of the Bristol Blues for the 2020 season, as announced Thursday by league commissioner Sean McGrath.

The Blues, who play their home games at the nearly 5000-seat Muzzy Field, will give the league a presence back in the heart of Connecticut and represent the third NECBL team in the Constitution State alongside the Danbury Westerners and Mystic Schooners, two of the oldest organizations in the league.

Founded in 2015 by a leadership group comprised of Elliot Scheiner, the Blues represent the third time an NECBL organization has forayed into the suburban Hartford area: the Bristol Nighthawks played during the league’s two years (1994-95) before the Bristol Collegiate Baseball Club did so in 2010 before moving to Mystic.

"The NECBL is comprised of 13 scenic communities in New England which all share a passion for baseball and their hometown team,” McGrath said. “What makes them all special are the fan bases and individuals who lead these organizations. The Blues organization has done a tremendous job through the years at integrating the team in their community, and we look forward to bringing some of the best college players in the country to Bristol.

"It has been a dream of ours to be a part of the NECBL,” Scheiner said. “We are thrilled to be a member of one of the greatest summer collegiate league in the country. Our organization and the fans of Bristol will be excited to see the elite caliber of player that the NECBL possesses."

Blues general manager Nick Rascati echoed those sentiments: "As a young boy, I fell in love with the game of baseball. As a player, coach and now General Manager of the Bristol Blues, I am truly blessed to be here. The NECBL is a fantastic league, and I am thrilled to see the entirety of Bristol stacked up against the elite competition."

Best known as the home of ESPN, Bristol is also home to Lake Compounce, America's oldest continuously operating theme park. Bristol was known as a clock-making city in the 19th century, and is home to the American Clock & Watch Museum. Bristol's nickname is the "Mum City", because it was once a leader in chrysanthemum production and still holds an annual Bristol Mum Festival.

"On the field, we are confident the Blues organization and General Manager Nick Rascati will be able to assemble a roster of elite level college players from every conference and every part of the country,” McGrath continued. “The NECBL offers high-caliber college players the opportunity to play with and compete against some of the best players in the country each summer. On average, about 25 percent of our players are chosen in the MLB Draft annually, indicating the high quality and elite level of student-athletes that join our league each and every year."

The Blues will be slotted in the Southern Division with Danbury, Martha’s Vineyard, Mystic, Newport and Ocean State. With the league remaining at 13 teams, a 44-game schedule will still be utilized. The entire 2020 schedule will be unveiled in the weeks ahead.

For information on the Bristol Blues, visit www.BristolBluesBaseball.com.