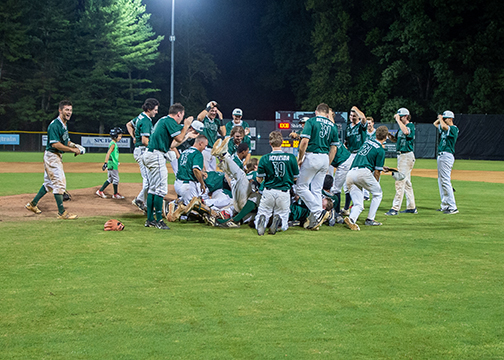 Southern was the leader of the Bethesda lineup, both with his experience from being with the Big Train last summer as well as his offensive production this summer.

But in front of MLB scouts at the Southeast Collegiate Prospect Showcase, Southern got hurt early in the first game. Thomas had to take the torch.

Thomas went on to lead the Cal Ripken League in RBIs and was among the batting average leaders in Southern’s absence. But there was something missing.

When the Big Train needed him most, Thomas did something cool. He provided the game changing moment as Bethesda came back to win game three of the LCS 6-4 over the Silver Spring-Takoma Thunderbolts, winning the 2019 Cal Ripken League title.

The CRCBL title is title is the fourth straight and eighth overall for the Big Train.

Last summer, Thomas sat in the opposite dugout from the Big Train. He played for the Loudoun Riverdogs. But as Thomas watched his games against Bethesda, he realized he wanted to be on the other side, with a “B” on his hat and “Big Train” across his chest.

As he stepped to the plate in the bottom of the eighth inning the team he wanted to be a part of a year ago needed help.

Bethesda was trailing by four, down to its final five outs in the decisive game three of the League Championship Series.

Thomas had a chance to make the biggest impact of the season for the team he longed to play for.

Thomas took the first pitch of his eighth inning at bat, but he turned on the second. He squared up the pitch and launched it into center field.

The Big Train crowd had no-doubt where the ball would land when it left Thomas’ bat. His hit sailed over the scoreboard in deep center field, disappearing from sight behind the fence.

“Once I saw it get out, I just took in the moment,” Thomas said. “I looked around the crowd. It was unreal to see all those fans up and down. When I touched home plate every single one of my teammates was there ready to greet me. That’s an unreal moment I’ll never forget.”

“That home run definitely meant a lot to me,” Thomas said.

Thomas’ home run was the spark to the Big Train’s comeback, and it was the moment that earned him the LCS Most Outstanding Player award.

It was a comeback where the lineup would score six runs in the bottom of the eighth inning. It turned a four-run deficit into a two-run lead. Bethesda had gone from five-outs away from losing the LCS title to three-outs from winning it.

Chase Lee (Alabama) struck out Lucas Donlon (Virginia Tech) on three straight pitches to seal it. Thomas ran out from behind the plate to hug Lee as the Crimson Tide reliever tossed his glove onto the mound.

The two were in the midst of a Big Train dogpile just to side of the mound, a sight Big Train player of the past have known time and time again.

Silver Spring’s offense gave it an early lead, scoring two runs within the game’s first three batters. Ian McMillan (Houston) added another T-Bolts run in the sixth inning to make it 4-0. But it wouldn’t be enough.

“I hope that home run was enough for him,” Thomas said of Southern’s comment.