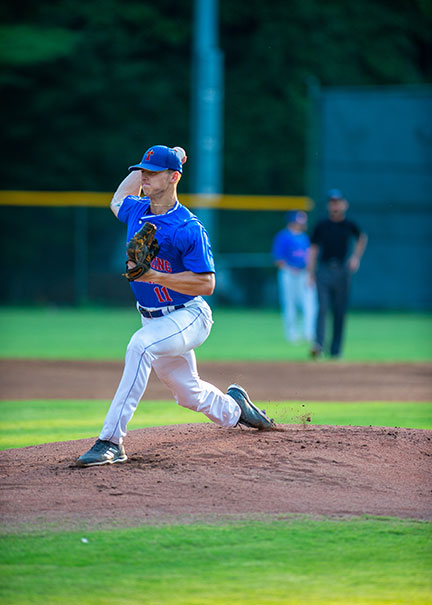 Doug Remer asked Charleson if he wanted game one.

Charleson prepared like any other game, listening to music and shagged balls during batting practice. He was staying loose, and he wasn’t thinking about what made this game different.

He was getting the ball to start the League Championship Series. An LCS against the Bethesda Big Train, a team that had beaten his Silver Spring-Takoma Thunderbolts six out of seven times and had lost just seven games all year.

He was getting the ball to face the Big Train’s league leading offense, full of high major Division I hitters.

“I didn’t try to complicate it,” Charleson said. “Good pitches get good hitters out.”

Charleson didn’t complicate it. He was ready for the moment.

And he produced one of the best starts in his life.

In the hours leading up to the game, Remer told his daughter he believed they could win. He believed against the lopsided season series, against the Big Train outscoring the T-Bolts 56-38.

Standing next to him, Remer’s daughter nodded her head. Her dad had believed it, had said it could happen.

As she stood next to her father after the game, it had happened. Remer’s belief had become reality.

Behind Charleson on the mound and a big night from Lucas Donlon (Virginia Tech) at the plate, the T-Bolts left a stunned crowd at Shirley Povich Field as they beat, and shutout, the Big Train 9-0 in game one of the League Championship Series.

Charleson allowed a hit to Kobe Kato (Arizona) in the first inning and a hit to Drew Hamrock (Virginia) in the second. He had to wiggle out of jams in the second and third inning with a runner on third base.

But he made it look simple.

Hamrock got to third with no outs in the second inning. Charleson calmly retired the next three batters in order. He got an inning ending double play to face the minimum in the fourth inning.

Charleson said he didn’t have his best stuff. His command wasn’t consistent as he walked more batters (5) than he struck out (3).

His breaking ball was all he needed. That pitch caused broken bats, and weakly hit balls.

“This is a big time game,” Charleson said. “The crowd, the energy was amazing. I had to be focused on every single batter. It was a good test.”

Remer didn’t know what he was getting in Charleson when he arrived. Remer said he was told coaches wanted to see what he had too.

Charleson was the starting pitcher for the T-Bolts against the Giants on July 19. He pitched three innings, and looking back on it, Remer though he took him out to early.

Without meaning to, Remer believes he lit a fire under Charleson. A fire that helped Remer learn what he had.

“I think that game I pulled him early, wasn’t all his fault we didn’t make plays, but he’s like ‘I want the ball,’” Remer said. “I think that definitely lit a fire, and he came out with it tonight.

He bounced back with a six inning, shutout outing against the Braves on July 23. From that start Remer knew Charleson was ready for the Ripken League’s biggest stage.

Remer said he knew Charleson had the toughness to handle the game, but he wasn’t expecting what he wound up getting on the mound.

“We had him going three or four innings,” Remer said. “They weren’t hitting him. The changeup was effective…When you have a guy like that, you have to roll with him.”

Donlon hit two home runs in the T-Bolts series clinching 10-9 win over the D.C. Grays on Saturday. His bat stayed hot in Bethesda.

Donlon got a hit in each of his first three at bats and drove in three runs, including a solo-home run to left field, his third home run in two games.

Brady Pearre (High Point) had two RBIs and two runs scored in addition to throwing a scoreless eighth inning out of the bullpen.

The T-Bolts are now one win from the team’s first CRCBL title since 2006. Silver Spring and Bethesda were co-champions in 2005 before Silver Spring won the outright title in 2006. The T-Bolts haven’t been back in the LCS since the ’06 title.

This article has been updated to fix a fact error