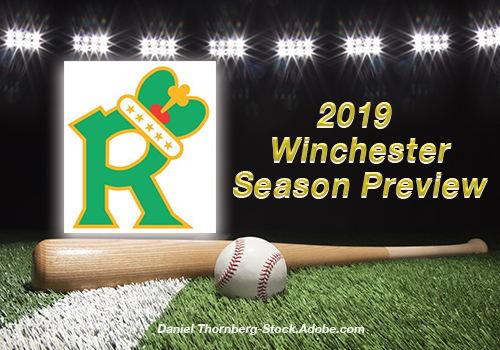 Sunday Morning, 10:15am, May 12th. It’s raining hard enough to wash the topsoil off a nearby baseball diamond and send it to the gutter, across the parking lot, and into a nearby stream. It reminds me of last year. As I walk to the press box, I’m pretty certain that if I was in left field water would cover the tops of my shoes. Oh yeah, and it’s Mother’s Day, but Mike Smith, new head coach for the Winchester Royals, isn’t home fixing his wife breakfast in bed. No, he is in the press box at Bridgeforth Field working with Dave Pyne, Royals’ board member and team score keeper. They are sorting through uniforms, counting belts, and socks trying to find the right sized pants for one of his new team members.

“This is a 38. This should work,” Mike says. When I ask him what he got his mother for Mother’s Day he says a card and a surprise. “A winning season?” I ask. He laughs. “She’s a big fan. She’ll be at every home game,” he says. How could she not be a big fan? Mike grew up just around the corner from Winchester in nearby Charles Town, WV. He got his coaching start at Clarke County High School, in Berryville, Virginia, just a few miles down the road, where he is still coaching.

With 23 years experience in high school and college baseball, he’s seen it all, including several close looks at the Valley League. This is his second stop in Winchester. He was an assistant coach with Kevin Anderson at Shenandoah University and worked with him in 2006 when Kevin coached the Royals.

Mike helped give the Strasburg Express their start as an assistant there and also was an assistant coach and general manager in Purcellville and Charles Town. He’s even done some birddogging as an associate scout for the Kansas City Royals, where he spent eight years working under General Manager Dayton Moore, who managed the Winchester Royals back in the 70’s.

Smith has recruited what looks like a solid roster, including returners Aaron Palensky (Nebraska), a second-team All-Big Ten honoree this spring who had a .386 on-base percentage and made the All-Star team last summer, Masen Prososki (Louisiana Monroe), who led the league with 27 stolen bases, and Colt Webb (VCU).

Coach Smith is particularly excited about newcomers JP Dyer (Tennessee Tech), Jeremiah Boyd (Presbyterian), and Cam Roof (Winthrop) on the offensive side. Dyer put up an excellent slash line of 330/421/581 in 191 at-bats as a freshman for the Golden Eagles.

Pitchers Smith is anticipating include Mike Anderson (Oklahoma-Wesleyan), Brandon Schaffer (Potomac State), and Trey Braithwaite (Naval Academy). Anderson was an astonishing 12-1, 3.39, with only 18 walks in 106 1/3 innings this spring, Schaffer was even better, going 7-1, 1.82, with 85 strikeouts in 54 1/3 innings, and Braithwaite struck out 33 batters in 29 innings out of the bullpen, and was named first team All-Conference in the Patriot League.

The team will also include a local product, Alex Amos, who hails from Winchester, and was named to the 2017 ACC All-Freshman team thanks to his performance at Pitt. Longtime Loyal Royals will also recognize a name from West Virginia University- Beau Lowery, whose father and grandfather, both named John, played and coached in Winchester in years past.

Smith's expectations include winning the division…but that might depend on if the weather holds and it doesn’t rain like it did last year, and if he can find the right sized pants for all his players. Only time will tell….

The Royal's season begins on June 1st with a home game against Front Royal. First pitch is scheduled for 7:00 PM. The Royals have also announced that admission if free for the home opener.

Remember that if you are unable to attend a game, you can always watch live on Facebook, courtesy of Sheetz and Subway, or listen to the live broadcast on Stretch!

To read much more about the Valley League check out allthingsvalleyleague.com.