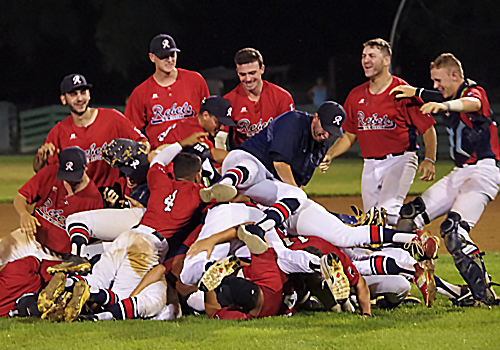 The Valley Baseball League has announced its 2019 regular season schedule.

The season opens on Friday, May 31st, with the defending champion New Market Rebels hosting 2015/2016 VBL champ Strasburg at 7:30 p.m. at Rebels Park.

Opening night will also feature Covington at Waynesboro, Woodstock at Purcellville, Charlottesville at Harrisonburg and Front Royal at Staunton. The Winchester Royals open on June 1st, at home against Front Royal.

The 2019 schedule was developed by John Michael Boswell, a student-athlete at Furman University, under the guidance of Assistant Professor Ben Grannan. The project supports The Furman Advantage to guarantee every student an unparalleled education that combines classroom learning with real-world experiences.

Grannan and Boswell’s computerized schedule optimizer limits the number of consecutive home or away games for each team (given each facility’s availability), avoids the longest bus trips on consecutive evenings, and spaces out home/away splits and off days throughout the season.

The schedule also ensures that 97% of games on Friday/Saturdays and the final several days of the regular season are against divisional opponents, putting key rivalries on prime dates and boosting late-season playoff races.

The 2019 VBL All-Star Game will again be held at James Madison University’s Veterans Memorial Park, on Sunday, July 7. The regular season is set to conclude on July 25.