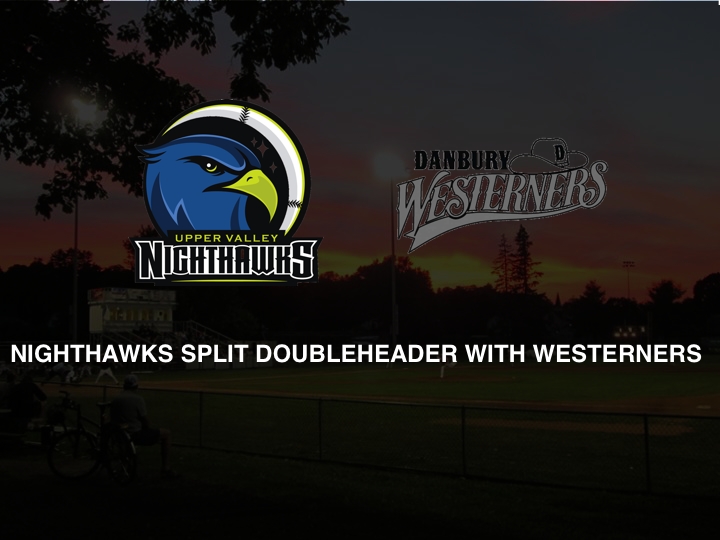 DANBURY, Conn. - Anthony Meduri's lead-off home run in the top of the third inning of game two along with Chris Berry's two homers helped lead the Upper Valley Nighthawks to a doubleheader split against the Danbury Westerners on Tuesday evening at Rogers Park.

Following the two games, the Nighthawks remain a game above even at 14-13, while the Westerners are now 12-17.

The Westerners struck for five runs in the top of the fifth to reclaim the lead from the Nighthawks and hold on for the victory. Reid VanScoter was tagged with the loss after putting the go-ahead runners on base before departing. He allowed four earned over four innings of work.

Following Danbury’s hot start where it surged out to a 3-0 lead through an inning and a half, Upper Valley answered with a couple of runs each in the last of the second and third frames.

In the second, Upper Valley took advantage of poor fielding after Ross Cadena and Alvin Melendez worked their way into scoring position. A couple of errors led to both Cadena and Melendez crossing home plate to bring the Nighthawks to within one.

Kicking off the third, Greg Hardison dug his way out of an 0-2 hole to collect a base hit. Anthony Quirion followed that up by crushing the ball over the fence to put the Nighthawks ahead 4-3, at the time.

Upper Valley added one more run in the bottom half of the fifth to pull within three, but was unable to get any closer.

The Nighthawks began game two as the more aggressive squad, scoring in the first and never looking back. Hitting was on display as all of Upper Valley’s runs were scored via the long ball.
Chris Berry stepped into the batter’s box to lead off the contest and spent no more than the necessary time, launching the third pitch of the game over the outfield wall. The solo shot was the Seminole, Fla. native’s first long ball of the season. However, he was not done as he would go deep in the top of the seventh – driving in Eddie Modica – to provide a couple of insurance runs.
In the fourth, immediately before the Westerners would score one to get on the board, Meduri slapped a solo homer to keep Upper Valley ahead.
Danny Wirchansky provided three quality innings to start the game as he struck out one and did not surrender a run. Picking up the win on the bump, David Sampson tossed one inning without allowing an earned run. Dazzling in relief, Cole Stetzar tallied the save after going three frames and allowing just one hit.
Upper Valley returns to action at 6:30 p.m. on Wednesday as they look to build on the win in game two when they face the Keene Swamp Bats at Alumni Field. Dan Stein and Josh Caredeo will call the action on the NECBL Broadcast Network.