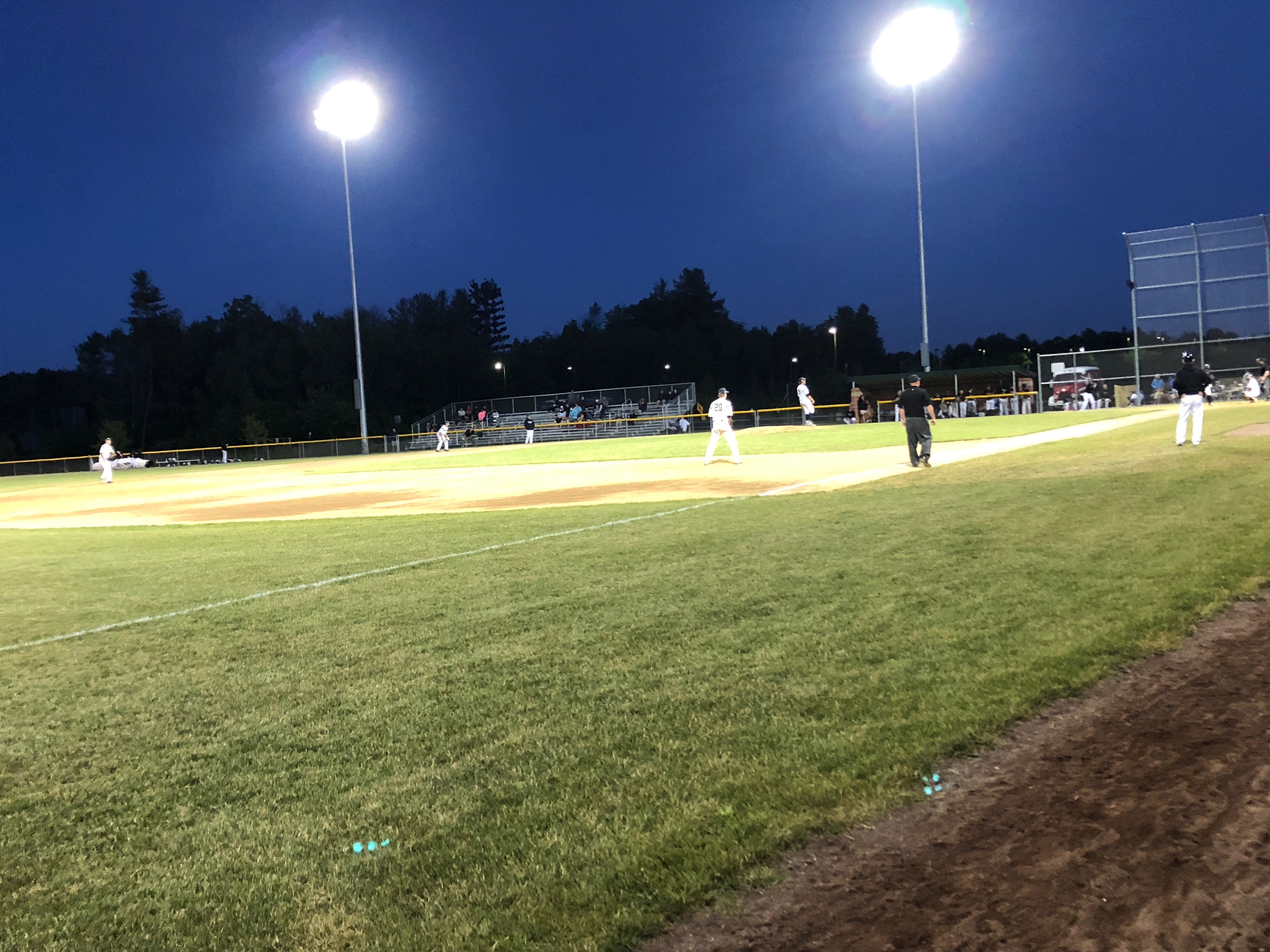 WHITE RIVER JUNCTION, Vt. —The Upper Valley Nighthawks captured their third-straight victory, as they went on to defeat the Keene Swamp Bats by a score of 12-4 on Thursday night at the Maxfield Sports Complex.
The Swamp Bats were quick to get to get on the scoreboard, plating a pair of runs in the first frame on a single and a stolen base with a Nighthawks’ defensive miscue.
Upper Valley countered in the bottom of the 1st, as newcomer Austin Wilhite (Georgia Tech) continued to prove his worth, driving in Anthony Quirion (Lamar University) from third base.
A Joe Breaux RBI-single to right-field extended Keene’s lead to 3-1 in the top of the 3rd inning, but the Nighthawks battled back quickly.
Greg Hardison (UNC Greensboro) singled to drive in a run in the home-half of the third before Hunter Gibson (Wichita State University) walked in a run to tie the ballgame, 3-3.
Just one batter later, Matt Tarabek (Fordham University) hit a two-out single to add two more runs to the Nighthawks’ tally, giving them a 5-3 lead after three innings.
Keene’s Alex Griffith pinch hit in the 6th inning and drove in a run on a sacrifice fly, and reduced Upper Valley’s lead to just one run.
The Nighthawks fired back in the bottom of the 6th when Quirion hit a 2-RBI double to the centerfield fence, scoring Tarabek and Eddie Monica (Long Island University) increasing Upper Valley’s lead to three runs.
During the next at-bat, Wilhite struck again with his second RBI-double in as many days, which scored Quirion and gave the Nighthawks a 8-4 lead over Keene.
The Upper Valley bats came to life again in the 8th inning, when Quirion and WIlhite pieced strung together back-to-back triples, scoring three runs for the Nighthawks, and giving the home team a seven-run lead.
Riley Smith (University of Minnesota) pinch-hit for the Nighthawks later in 8th inning, and drove in the Nighthawks’ final run of the evening on a single to centerfield.
Quirion, a Dixville, QC native, finished the day 4-for-5 with four RBI, while Wilhite went 3-for-4, drove in three runs, and was a homerun shy of hitting for the cycle.
Nighthawks starter Reid VanScoter (Binghamton University) tossed four innings, surrendering three runs on eight hits, and struck out four Keene batters. Reliever Jordan DiValerio (St. Joseph’s University) (W, 1-0) pitched four innings, giving up one run on five hits, and fanning five. AJ Franklin (Vanderbilt University) closed out the 9th inning for the Upper Valley.
The Nighthawks are back in action tomorrow night, hosting the New Bedford Bay Sox at 6:30 PM. It will be Support the Haven Night at the ballpark, where fans are encouraged to bring non perishable food items to support the Upper Valley Haven. If you can’t make it to the ballpark, Dan Stein and Brendan Howe will have all of the action covered on the NECBL Broadcast Network starting at 6:15 PM.
Mark your calendars! On Sunday, July 8th, the Nighthawks are going back in time to the 1980s. 80s Night will feature a post game concert from the Tricksters, a Guinness World Record attempt for the most popped collars, and all the greatness that was the 1980s.