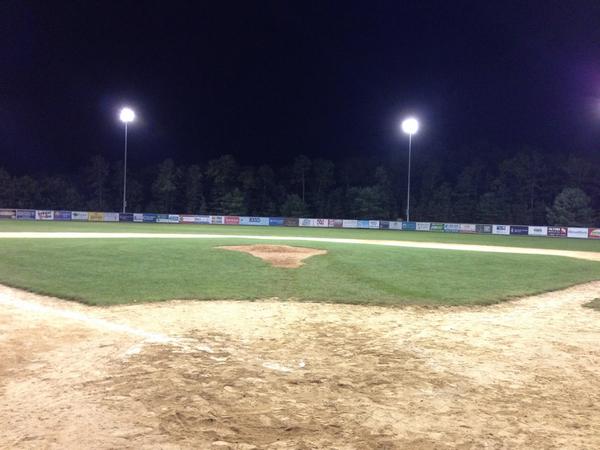 WHITE RIVER JUNCTION, Vt. —A 9th inning rally sparked by Anthony Quirion and Bryant Bowen reduced the Pilgrims’ lead to three runs, but the offensive efforts were not enough as the Upper Valley Nighthawks fell to Plymouth, 7-4, on the road Friday night.
The Pilgrims got on the scoreboard early, piecing together a pair of hits to drive in one run, and walked in a second in the home-half of the first inning.
Plymouth’s Tyler Wyatt hit a grand slam in the bottom of the 5th to tear open the game, and extend the Pilgrims lead to six runs.
One inning later, Riley Helland drove in a run on an RBI single to give the home team a 7-0 advantage.
The Nighthawks finally broke the silence in the top of the 7th inning when Anthony Quirion (Lamar University) drove in Eric Feliz (University of Notre Dame) on an RBI double.
Just one batter later, Hunter Gibson (Wichita State University) came around to score on an Alvin Melendez (Fordham University) single and make the score 7-2 Plymouth.
The Upper Valley bats came to life once again in the top of the 9th inning, as Quirion and Bowen both homered to bring the Nighthawks within striking distance, but their last-minute efforts were not enough to surpass the Pilgrims.
Nighthawks’ starter Reid VanScoter (Binghamton University) threw 4.2 innings, gave up five runs on six hits and struck out two. Jordy Allard (Southern New Hampshire University) came in to face two batters, giving up one hit, a run, and fanning one. Jordan DiValerio (St. Joseph’s University) was next out of the bullpen, giving up one run on two hits and striking out five. Ty Adcock (Elon University) capped off the night on the bump for Upper Valley.
Upper Valley returns home tomorrow, playing host to the Valley Blue Sox at 6:30 P.M. It will be First Responder Appreciation Night at Maxfield Sports Complex. The Nighthawks have invited all Upper Valley first responders to attend for free and there will be Police, Fire, and EMT vehicles for fans to see. If you cannot make it to the ballpark, Dan Stein and Mike Lord will have the call at 6:15 P.M.