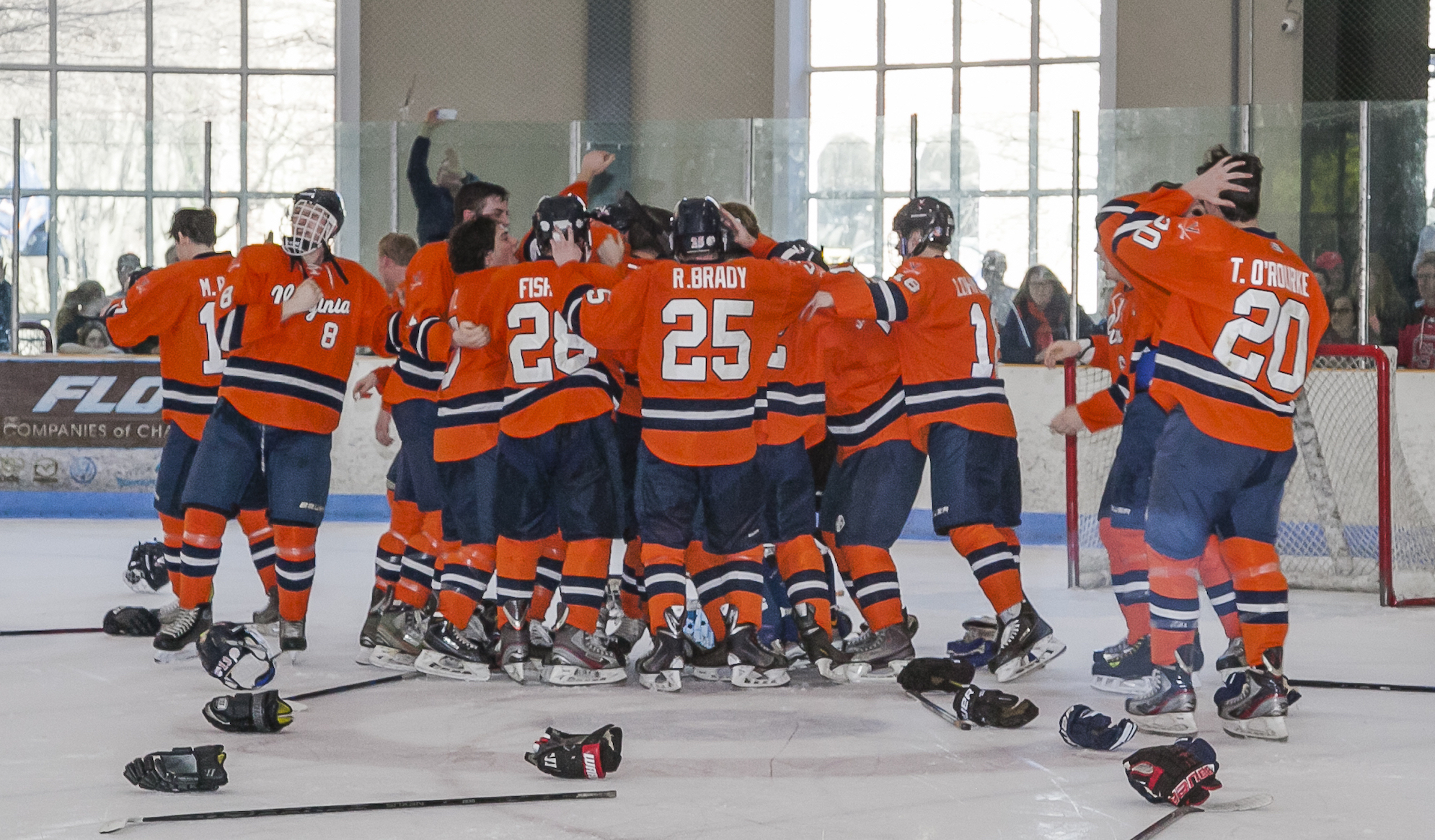 In 2015, the 6-foot-1, 175-pound native of Darien, Conn., backstopped his high school team to the Connecticut state crown. He and his teammates duplicated the feat a year later.

Last season Voigt made the jump to the American Collegiate Hockey Association, where he led the Virginia Cavaliers to a championship double: the best regular-season record in the Atlantic Coast Collegiate Hockey League and the Admiral’s Cup for winning the circuit’s championship tournament, the latter for the first time since 2000.

Voigt made more than 30 saves in the Cavaliers’ 5-1 win over a tough North Carolina State team in the tourney finale — while playing on a broken ankle. Prior to the playoffs, the team’s doctor cautioned Voigt that while he was unlikely to injure his ankle further, playing on it would be extremely painful.

(Photo: UVA’s David Voigt makes a save against James Madison in the ACCHL’s championship tourney. The other Cavaliers are Mark Brady, 17; Brian Jigarjian, 23; and Kevin McCollum, 6.)

“We were probably outmanned by N.C. State, but the guys rallied behind our injured goalie. They showed a lot of heart stepping up for him,” said Colin Davis, himself a Junior A goalie in Canada before tending goal for Neumann University in Philadelphia.

The third-year Virginia head coach hopes Voigt, now a sophomore, can duplicate his freshman success, which included a 13-3-0 record (8-0-1 in ACCHL play) and a 2.96 goals against average.

Thanks to two months in a protective boot this spring, Voigt, whose dad played baseball for UVA, will set up in the Cavs’ crease this fall with two healthy ankles and, in front of him, a combination of talented recruits and several veterans ready to break out at the non-varsity Division 2 level.

Virginia’s evolution from ACCHL also-ran to champion has been in the works since Davis took the Cavs’ reins prior to the 2014-15 season and made winning the Admiral’s Cup the club’s No. 1 goal.

“I wanted to instill a winning culture,” said Davis. “ . . . I run a certain system that works for all 21 guys, and that keeps us fresh late in games.

“I’m a statistics junkie. We knocked about a goal off our goals against average last season. We want high-volume shots, shutdown defense. We play the odds.”

“Having him in the lineup was big for us. It gave everyone confidence. We no longer worried about shots from the blue line.”

The rest of the roster will look dramatically different in the fall. Eight of the nine seniors on last season’s team have graduated. The lone returnee from that group is center Kevin McCollum, now a graduate student, who was second in scoring for the Cavaliers in 2016-17 with 12 goals and 10 assists and probably is the team’s most leading offensive performer.

Davis also is looking forward to the return of several other promising players and a handful of talented newcomers he figures will help the Cavaliers as they attempt to hang onto the Admiral’s Cup.

He described the team’s corps of defensemen as “stout,” with the top-two blue liners last season, sophomores Davis McNulty and Nick Tuzinkiewicz, returning. They will be joined by veterans Ted O’Rourke, Henry Pollock and Tyler Lohmeyer.

The team’s newcomers may include two recruits from prep schools who Davis said have border-line NCAA Division III talent. Both forwards, they have yet to be accepted for admission.

Davis said that while his top line probably will be comprised of McCollum, Josh Katz and Jack O’Rourke, “we definitely have to find additional offense.

“We have two sophomores, Jacob Fishman and Jack Yager, back to help fill out the second line. Second-line scoring will be a key for us.”

Looking ahead to the coming season, Davis expects Virginia Tech and North Carolina State to be in the thick of the ACCHL’s regular-season race and become championship tournament favorites.

The Hokies rejoined the ACCHL this offseason after competing in the highly regarded D2 Mid-Atlantic Collegiate Hockey conference for seven years and qualifying for the ACHA Southeast Regional Tournament six times and nationals once, in 2011-12.

Virginia Tech has been dropped into the revamped Central Division with Virginia, James Madison, Wake Forest and High Point. The Cavaliers will play each of them two times in the regular season.

“The championship was our first in 17 years. It was a monkey off our back,” said Davis. “The previous two years I think we were seeded each year.

“Now, the guys want to be part of the hockey program at UVA, and they want to have a legacy. [The title] put us on the map at school.”

IMPORTANT INFORMATION REGARDING THE 2018-19 SEASON