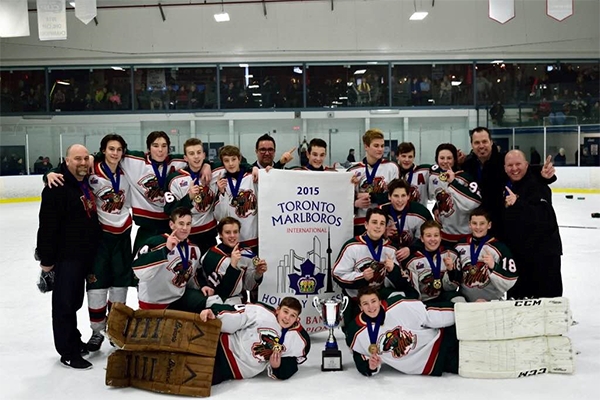 The Eastern Ontario Wild, Minor Bantam 2002 team continues to impress and show that It's brand of hockey is hard to beat.

Traveling to Toronto and winning the prestigious Toronto Marlboros Holiday Classic, the team solidified its reputation as a top team in all of Ontario and one that is hard to beat.
The E.O Wild finished the round robin with a 3-0-1 record and entered the playoff round as their pool's winner. Ahead in the quarter finals they faced a York Simcoe team ranked 7th in the province and a formidable opponent. With a hard fought 3-2 win the E.O Wild advanced to the Semifinals and a date with the top team and tournament hosts, The Toronto Marlies. Never in our previous encounters have we managed to beat them until now, dominating the game and the scoresheet with a 4-1 final score. The team played a fantastic semifinal and "booked their ticket" to the finals, facing the #3 ranked team, the North York Rangers. A similar style team to the E.O Wild the final game did not disappoint. With the game tied 2-2 late in the 3rd period, the E.O Wild boys found the back of the net and won the biggest tournament of the year by facing and beating some of the top ranked teams head-to-head.
Congratulations to all the players for representing themselves, their team and association with pride; being gracious in Victory and earning this tournament win by hard work and determination. Special thanks to the head coach Carl Robillard and his staff for leading the boys to the top. Special mention to Joshua Barnes for winning the Tournament's MVP award and our 2 goaltenders, Jake Robillard and Joe Vrbetic who led their team to an impressive 6-0-1 record. Go Wild!!