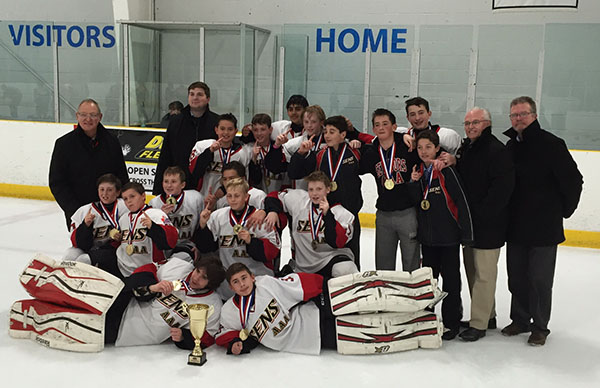 The Ottawa Jr. Senators headed west to Toronto November 5-8 to compete in the 2015 Shanahan International Hockey Tournament.
The Senators went 4-0-0 in round-robin play posting wins over Peteborough Petes, Vaughan Kings, Cambridge Hawks, and the Buffalo Jr. Sabres, outscoring their opponents 21-6.
In post round robin play, the Senators bested the Ajax-Pickering Raiders in the quarter-finals, and the Richmond Hill Coyotes in the semi-finals, both by identical 5-2 scores.
Trailing the Don Mills Flyers 1-0 after two periods of the final, the Senators Connor Rooney tied the game with a goal with 12:12 remaining. This set the stage for Connor Lockhart to score an unassisted goal with 8:43 to go, giving the Senators a 2-1 lead that the Flyers could not overcome.
Shown in the picture is the team having a post-game celebration !
Congratulations to all the players and team officials on their tournament win !!