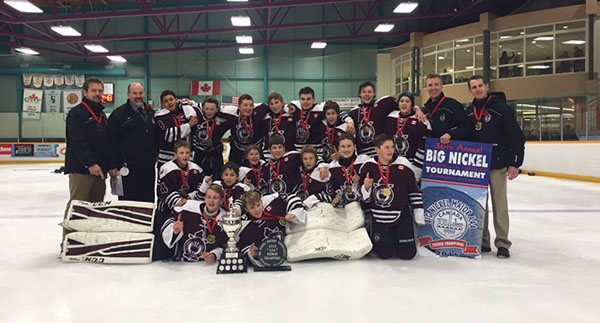 The Ottawa Valley Titans made the trek north to Sudbury November 5-8th to compete in the 2015 Major Peewee “AAA” Big Nickel tournament.
The Titans posted a  3 win – 1 loss record in round-robin play, finishing as the #2 seed in the Pee Wee division.
Semi-final play saw the Titans meet up with Nickel City Sons... the team who had handed them their only loss in round-robin play. The Titans avenged that loss with a 4-1 win and a spot in the tournament final.
The Titans were then matched in the final with the #1 seed of the division...  league rival Eastern Ontario Wild. The Wild had a perfect 4-0-0 record in the round-robin, and advanced to the final with a 4-2 win over the Thunder Bay Kings in the semi-final.
The Titans emerged triumphant with a big 5-1 victory. They are shown celebrating after the game !
Congratulations to all the players and team officials on their tournament win !!