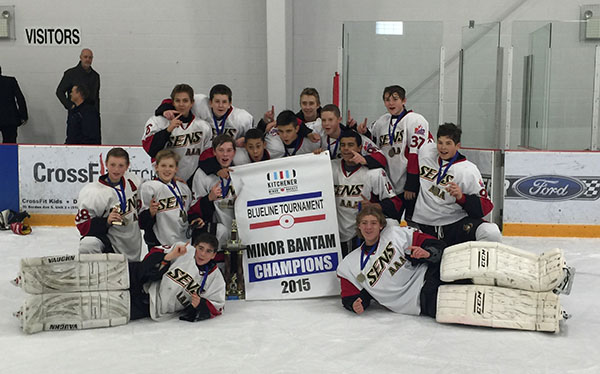 In its third tournament of the season the Ottawa Sens Minor Bantam team entered this twenty team competitive tournament without four of its players due to injury.  Playing with a short bench the Sens AAA team fought their way through round robin play to win their pool and advancing directly into the final four.  In the semi-finals the Sens faced the undefeated home team, Kitchener Jr. Rangers whom did not give up a goal against.  After a very well played game by both teams the Sens emerged with a 1-0 win to knock out the Rangers.  Just a few hours later the tired but scrappy Sens faced a tough Peterborough Petes team and the players left everything they had on the ice and came away with a highly entertaining 2-1 win to take home its second tournament championship.  Two of our players also were also honored with individual awards: Tournament MVP – Jordan Provost (G) and the Memorial Award  – Tristan Allard (F)